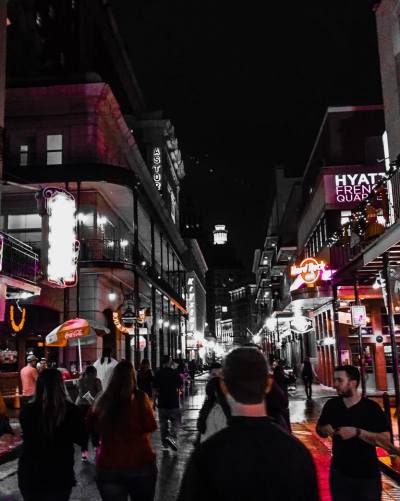 Originally a quiet residential street, post-World War II Bourbon was populated first by jazz clubs, and then by some of the more risqué establishments that have earned it an infamous reputation.

Contrary to a lot of opinion, Bourbon Street is NOT named after the Kentucky whiskey. When the city was founded, it was named after the French Royal Family, the "House of Bourbon", which produced a number of French kings, including Louis XIV, The Sun King.

The Kentucky whiskey, Bourbon, had no connection however, with naming of Bourbon Street. It is named after Bourbon County, Kentucky, which also derives its name from the same royal family.

At any rate, Bourbon Street was a prestigious residential street during the early days of New Orleans. For the past century, particularly since World War II, it has had an entirely different reputation, which is now more closely related to that Kentucky Whiskey. Intermingled here are traditional jazz clubs, strip joints, restaurants, bars of every type, and the ubiquitous souvenir shops.

Bourbon St. during the day is much like any other French Quarter street. With lingering effects from the previous night's partying, it is quiet, with delivery trucks, and bar and restaurant owners, who are busy hosing down the sidewalks. At twilight, however, the lights come on, and Bourbon Street comes alive with crowds of partygoers and the curious. There is a cacophony of music emanating from the various bars and clubs, as barkers try to entice people inside their respective establishments.

During Mardi Gras, however, the street is closed to vehicles for five days.