A Brief History of the Mississippi River 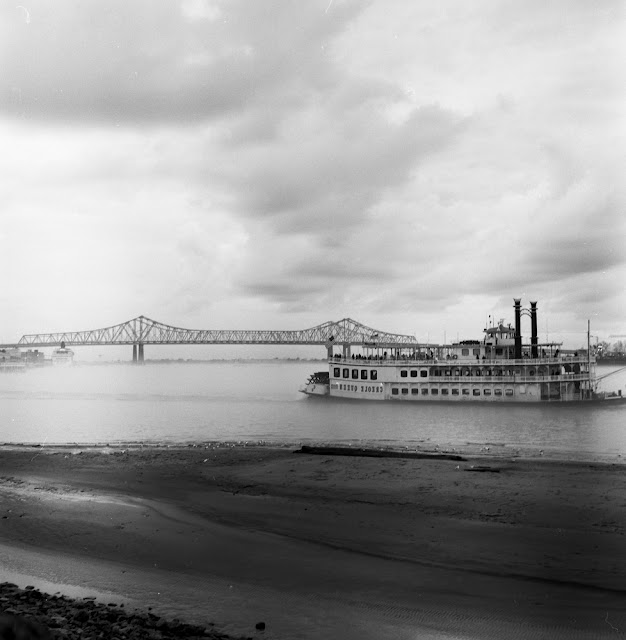 To some, the Mississippi River is nothing more than a brown slice of water separating the east bank from the west bank of New Orleans. Its a reason to pay a toll. To others, its been a way of life for hundreds of years, a winding soul that ushered in a dawning country atop its tumultuous current. Nevertheless, regardless of one's perception, this body of water tout's an irrefutably significant history - A history that defines this region, and this country, for better or for worse, to heck or high flood water.

Spanning over 2,348 miles, the Mississippi is the second longest river in the United States, and it's drainage area, approximately 1,250,000 square miles, is the third largest in the world. The water rises in Minnesota and runs south, inevitably flowing in to the Gulf of Mexico. For this very reason, as riverboats were developed to navigate the insistent currents, the Mississippi became arguably the most important vein of transportation in North America.

The first Europeans to ever set eyes on the river were Hernando De Soto and his group of explorers in 1541. In 1682, a Frenchman by the name of Robert de La Salle reached the mouth of the Mississippi and claimed the entire valley in the name of France. The western portion was eventually purchased by the United States in 1803, resulting in the largest real estate transaction in human history - The Louisiana Purchase.

The Mississippi River system would go on to forge the settlement of central United States. In the early 1800's, steamboats would provide the necessary transportation to move goods and travelers along the river. In January 1812, the steamboat New Orleans reached its namesake city after a four-month voyage on the Ohio and Mississippi Rivers from Pittsburgh. The voyage marked the beginning of commercial steam navigation on inland rivers and led to revolutionary economic and cultural change. The river had eventually become such a vital aspect of industry that during the Civil War, control of the waterway was a major strategic objective of the Union forces.

Today, many, many years since Mark Twain wrote stories of his extensive voyages aboard riverboat steamers, the Mississippi River still meanders its way through our country, continually providing transportation, and distribution of goods to, and from the United States. The Port of New Orleans alone serves as the 6th largest port in the United States, with the collective ports of South Louisiana boasting the 9th overall ranking in the world.

So, as an exercise in humility, the next time you happen to stand on the banks of this mighty river, take a moment to quietly applaud its muddy waters, and recognize the rich contribution that's made it an artery to the very heart of this great nation of ours. Better yet, why not take a cruise along the Mississippi on one of the last remaining steamships in operation! ? Check out the links below and tell 'em the guys at 'Experience New Orleans' sent ya!