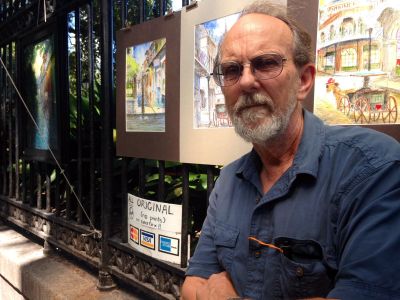 When Lee Tucker was a kid, he had an unlimited supply of paper. His dad worked for a company that periodically re-designed all of its business forms. When the new ones came in, the old ones, which were blank on the back, went out. So Tucker did what any other kid may do – he drew on them.

Those are the humble beginnings of a man who is now known as the “grandfather” of the French Quarter artists. New Orleans locals and visitors have seen Tucker’s artwork on the fences along Jackson Square for decades, and he’s acted as a guiding light for other artists who set up in the area.

He’s a French Quarter fixture, so much so that many think he’s always been here. But as a St. Louis native, it wasn’t until 1972, with a military tour of Vietnam and an art degree under his belt, that he first painted in New Orleans.

As a boy, Tucker loved drawing cars. He even tried to enter an annual contest Fisher Body (the company that designed cars for General Motors) sponsored for car designs. He was never pleased with any of the designs enough to actually submit one, but it did spark a passion that would he would carry with him through life.

After taking art classes in high school for three years, Tucker majored in art in college, and eventually joined the Air Force, which sent him to Vietnam. After he came back, he finished his degree work in Missouri, moved back to St. Louis and it wasn’t long before he took his art to New Orleans.

“I was doing $5 portraits, and then I eventually began doing color portraits,” Tucker said. I did that for about 5 years. I gradually went into doing street scenes because the thing with the portraits is that you could sit out here all day and if you don’t have any business, that day is gone. So if I didn’t have anyone to sit down and do a portrait, I’d do a little street scene, so at least I accomplished something.”

Over the years, Tucker has been a fierce advocate for quality artwork sold on and near Jackson Square. Artists must be licensed to set up around the square, and the city has an ordnance against selling prints. Unfortunately, according to Tucker, the ordnance isn’t enforced.

“The city doesn’t do much enforcement at all,” he said. “They have a lot of people out here selling sort of craft items now, and prints.  When you see people selling prints, you don’t know if the person selling the prints actually did the work or not. People buy this stuff thinking that they’re getting something original, but they’re not.”

That hasn't deterred Tucker, and artists like him, from selling their original work, though. To this day, if the sun is shining, you can find Tucker under a tree on Jackson Square working on his latest street scene.

He also has a little advice for anyone hoping to follow in  his footsteps: Use good materials, don’t put your hand on the paper when you’re drawing, and most importantly, “Draw. It doesn’t matter what. Draw every day.”