LPO: A Great Orchestra for a Great City 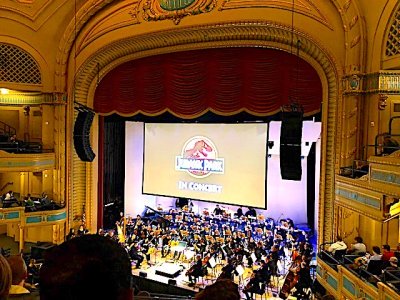 According to Daniel Lelchuk, Assistant Principal Cellist for the Louisiana Philharmonic Orchestra, “To be a great city you have to have a great symphony orchestra.” Last Saturday’s event – Jurassic Park in Concert with the LPO – proved New Orleans is a great city.

Watching Steven Spielberg's Jurassic Park with live music was an amazing experience. For one thing, seeing all those musicians on a stage beneath the huge screen at the Orpheum Theater drives home just how many talented people are involved in the making of one movie. It also makes it clear just how much sway composer John Williams – and music in general – has with our emotions. Was it the dinosaur or the music that made us jump? We think they were in cahoots. For the record, this wasn’t the first time LPO has played live along with a movie. They’ve done it in the past to beloved films such as the Wizard of Oz and Harry Potter and the Sorcerer's Stone.

LPO performs regularly at the grand Orpheum Theater, one of only three vertical theaters left in the United States. There isn't a bad seat in the house since the seats go up more than they go back or to the side, and the set-up makes for amazing acoustics (think "vertical speakers").

On February 27, 2018,  LPO will play another vehicle theater famous for its sound – Carnegie Hall in New York City. This will be the LPO’s first-ever performance at what must be the most famous concert hall in the world. Many have compared the sound of the Orpheum to that at Carnegie Hall. Along with vertical designs, both have heavy masonry walls and highly resonant wooden stage floors that make it possible for sound to project without amplification. When the Big Easy plays the Big Apple, LPO should feel right at home.

To purchase tickets to the Carnegie Hall event, or to help the LPO fund the trip through the "Musician Sponsor" program, click here.