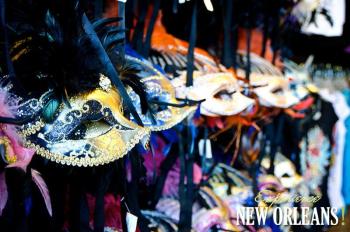 Happy New Year everyone! I hope you had a great New Year’s Eve and that so far 2013 is treating you well!

2013 started off with a bang in New Orleans with the Fleur De Lis drop and fireworks over Jackson Square, then the Sugar Bowl in the Superdome, but the fun and excitement isn’t over yet. In fact, it’s just getting started.

Mardi Gras season kicks off January 6th with the Feast of the Epiphany. There will be parades including the Joan of Arc parade in the French Quarter and the start of a new Mardi Gras tradition with the Phunny Phorty Phellows who will travel via streetcar Uptown. However, the most exciting news is that’s the day when King Cake’s traditionally go on sale!

The Mardi Gras krewe’s start parading on January 19th, all across the city and New Orleans region. I promise that there will be hundreds of floats and lots of bead throwing. Plus, it’s all free to see.

The Krewe’s take a couple days off for the Superbowl, then are back in action on the February 6th for the final and not to be missed leg of the carnival season.

For those who are still debating about coming, I’ve heard there are some hotel rooms still available. You don’t have any other excuses now!

Speaking of the Super Bowl , the NFL excitement kicks off at the end of this month with the NFL Experience. It’s an interactive theme park at the Ernest N. Morial Convention Center. The NFL Experience brings an electrifying atmosphere with more than thirty interactive football attractions, the NFL shop, a Hall of Fame exhibit and the showing of the Vince Lombardi Trophy.

The bad news is that the Saints aren’t going to be playing in the big game, but hopefully your team will be and you can come down and enjoy the city.

You didn’t think I was done? Did you? The fun never stops in New Orleans. Even Broadway Theater from New York wanted to come down for a visit in the form of the Jersey Boys. The award winning Broadway show will be playing nightly from January 8th to 27th at the Mahalia Jackson Theater.

Last but not least, for my fellow history buffs is the Commemoration of the Battle of New Orleans (January 8-12). At Chalmette Battlefield visitors can step back in time and watch military drills, cannon and musket firing as well as crafts and cooking demonstrations.