The 11th Annual Satchmo SummerFest will be August 4th – 7th, 2011 at the Louisiana State Museum's Old U.S. Mint in the French Quarter.

Get ready for it. The Satchmo SummerFest is back with enough jazz music, special events and great food to help you beat the heat. 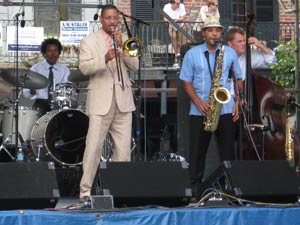 The 11th Annual Satchmo SummerFest kicks off at Muriel’s Jackson Square on Louis Armstrong’s birthday, Thursday, August 4th! The evening will feature an opening reception and keynote conversation with critically acclaimed British music writer Richard Havers and Grammy-winning record producer Russ Titelman. What better way to kickoff the festival named after Louis Armstrong than with a new comprehensive boxed set of Satchmo’s music? Already being hailed as “the most complete Louis Armstrong boxed set ever made available,” the set entitled “Satchmo” will be officially released.

You can still catch plenty of free music this weekend with several New Orleans mainstays in jazz including the Rebirth Brass Band, the Treme Brass Band and many, many more. Check out the official Satchmo SummerFest music schedule for the latest. And don’t forget the incredible food, special events and free seminars all weekend long.

Here is the official rundown of events from Satchmo SummerFest, and be sure to visit the festival’s website for schedules and the latest info.