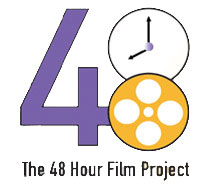 Many know that New Orleans is a filmmaking town. With attractive tax breaks and beautiful scenery and culture, New Orleans has provided the perfect backdrop for several Hollywood films and television shows.

Last weekend, the Crescent City played host to a different kind of filmmaking: The New Orleans 48 Hour Film Project. Small teams came together to write, shoot, edit and score an entire film in just 48 hours! Teams received details about a few elements that they had to include within the film, and then they were off to the races. This year, the filmmakers used the following elements.

Character: Thierry or Tami Bison, Interior Decorator
Prop: a cupcake
Line of Dialogue: "Try it. What have you got to lose?"

Hopefully, all of the teams have caught up on their rest, and they will be able to see the fruit of their efforts at this weekend’s screening of the films at Lupin Hall in the NOCCA Louisiana Arts Conservatory at 2800 Chartres Street in New Orleans. The films will be broken into three screening sessions starting at Saturday, August 20, 2011 at 4 p.m. The next screening group will start at 6:30, and the final group will show at 9 p.m.

Come out and support local artists who have basically completed the filmmakers’ version of a marathon!