Christmas Bonfires Along The Levees 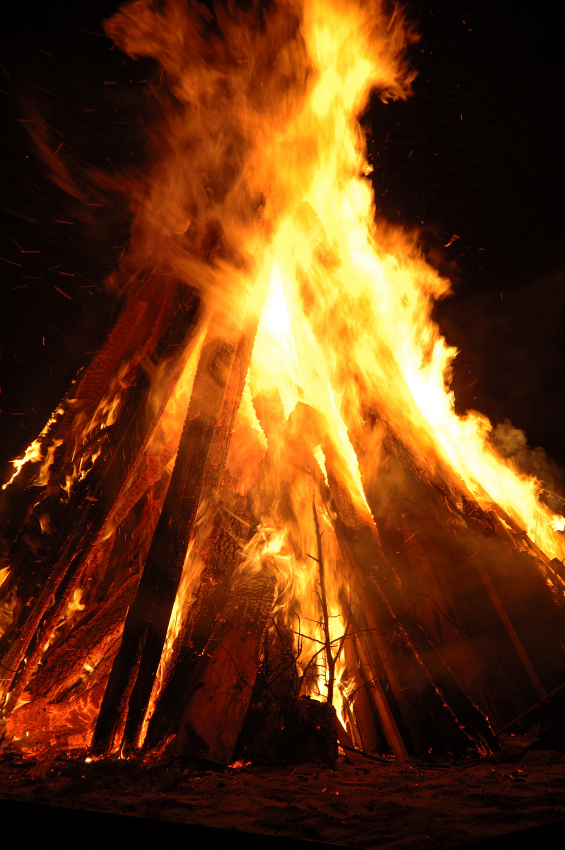 In Louisiana, Rudolph and the big guy, Pere Noel, get a little help with navigation to all of the homes of good little boys and girls. Throughout the holiday season, bonfires (some of them thirty feet tall) illuminate the sky for Santa Claus and his krewe of merry reindeer.

It’s a tradition dating back all the way to early 18th century, making it one of the oldest Christmas customs in the United States. Early European settlers brought the tradition here and it still continues today with more than one hundred bonfires lit along the Mississippi River in small towns like Garyville and Reserve.

Besides guiding Santa Claus and his team of reindeer, before the invention of G.P.S.'s,  the bonfires on the levees helped  family and friends find the right plantation home. There are also stories of bonfires being an excuse for younger members of the family to keep water inlets and swamps clean of washed up debris and driftwood so that boats could travel them safely.

Now as then, families build the bonfires. Many of them start building the bonfires during Thanksgiving break. Traditionally the families build the fires in the form of a teepee, however now it's just as common to build quare pyres (imagine a fort).  However, today it doesn’t stop there. In recent years, fires have been built in the shape of ships, log cabins and even the Mercedes Benz Superdome.

The bonfires have become a bit of a carnival-like attraction, but they haven’t lost their family friendly beginnings. Families set up lawn chairs around the fires, eat gumbo and watch homemade firework shows. Along the river, boats - from tiny paddleboats to large sternwheelers - cruise along the Mississippi to see the unforgettable light show.

If you don’t want to travel far upriver, right across the Mississippi River is the Algiers Bonfire this weekend.  At 8:30 p.m., they’ll be lighting a fire in the shape of the Algiers ferry. However, the funs starts at 5 p.m. with a military flyover, followed by music, a reading of the Cajun Night Before Christmas, and a second line.  If you’re in New Orleans, you can take the ferry (don’t worry, it’s not the one they’re burning) over to enjoy the show.

Festival of the Bonfires

A short drive upriver is the 24th Festival of the Bonfires. It’s a celebration of Christmas on the river, Cajun style, in Lutcher. There will be food, crafts, carnival rides, live entertainment and of course a bonfire lighting every night.  It takes place on the weekend of 13-15 at the Lutcher Recreational Park (Lutcher Avenue - LA Highway 3193, Lutcher, LA 70071).

The biggest night of bonfire festivities is Christmas Eve. Thousands of bonfires will be lit that night along the Mississippi River between New Orleans and Baton Rouge. Some of the best places to see the bonfires are along the river in Garyville, Gramercy, Lutcher, Paulina and Reserve (along Highway 44). The bonfires are lit at 7 p.m. and joined by fireworks in the air above the River.

Jump on the Bonfire Express with Gray Line New Orleans to avoid the hassle of driving, and enjoy door-to-door transportation from the French Quarter to Plantation Country to enjoy the Christmas Eve bonfires.

If Christmas Eve is wet, the tradition then becomes New Year’s Eve bonfires.