Audubon Park and The Fly 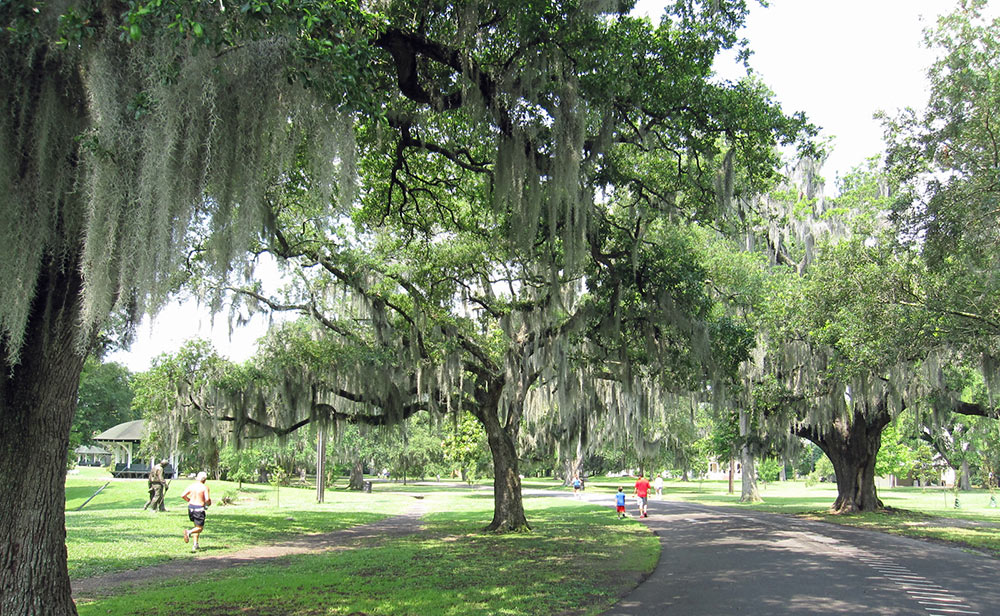 Home to about 150 oak trees, some of which have stood proudly over the area for more than 250 years, Audubon Park is one of the most beloved greenspaces in New Orleans. Located Uptown, the park stretches from St. Charles Ave, where it faces Tulane and Loyola universities, past Magazine St and to the Mississippi River, where it ends at The Fly behind Audubon Zoo.

If the oak trees themselves haven’t been witness to enough of New Orleans history, the park itself has its own rich backstory that contributes to local lore. Before becoming public grounds in 1850, the area was the young nation’s first commercial sugar plantation founded by New Orleans’ first mayor, Etienne de Boré, and before that, Native Americans called the land home. The park was a hotbed for activity in the Civil War, serving as a Confederate camp, Union hospital, and the activation site for the 9th Calvary, the “Buffalo Soldiers.”

In 1871, the city acquired and made improvements to the land to create an urban park, called Upper Park, to be the site of The World’s Industrial and Cotton Centennial Exposition of 1884, which would be the first world fair hosted by Louisiana. In 1886, city planners renamed the park to Audubon Park in tribute to artist and naturalist John James Audubon, the famous painter known for his “Birds of America”. In the late 19th century, landscape architect John Charles Olmsted, whose firm designed New York’s Central Park, transformed Audubon Park from swamplands into the scenic beauty it is today.

One of the most visible features of the park is the 1.8-mile paved jogging path that meanders through much of the length of the park, open from 5 a.m. to 10 p.m., where locals and visitors can be found taking scenic strolls, walking their dogs, or running, cycling, or rollerblading for fun and fitness. Audubon Park also offers three playgrounds and a swing set to complement its wide open spaces for picnics and play, perfect for families with active kids.

Bird Island, formally named Ochsner Island, is an island in the center of Audubon Park Lagoon that houses a prominent rookery featuring hundreds of birds’ nests each year, and it has been a part of Audubon Park for over a century. Species range from varieties of egrets and herons to the double-crested cormorant and anhinga.

One stately oak tree that stands out from the rest is the Tree of Life, whose branches stretch down low and whose roots are nature-made for easy climbing. The picturesque area frequently plays host to weddings, yoga classes, and a variety of other events. Nearby, The Labyrinth is a permanent circular ground structure with a winding path that has been seen as a sacred place for meditation and healing.

Love a good game of golf? Since 1898, the Audubon Golf Course has hosted amateurs, professionals, and tournaments in addition to offering a café at the Audubon Golf Clubhouse and Audubon’s Pro Shop for all golfing necessities. The park is also home to 10 clay tennis courts open for public play seven days a week starting at 8 a.m. until 5 p.m. through 7 p.m. depending on the day. Horse enthusiasts will love the state-of-the-art Cascade Stables riding facility, which is open for riding lessons by appointment for ages four to adult everyday but Mondays. Across the street from the golf course is the Whitney M. Young Memorial Pool, which is seasonally open to the public.

At the far end of Audubon Park from St. Charles Ave and behind the Audubon Zoo, The Riverview, known to locals as “The Fly,” stretches along the Mississippi River and is greenspace perfect for relaxing, having a picnic lunch, crawfish boil, barbecue, tossing a frisbee, or watching the sunset over the river. The Fly also features athletic fields, including fields for soccer, rugby, lacrosse, and flag football, in addition to five baseball diamonds, including the Whitney Bank Miracle League Field, which is built on a rubberized surface designed for children with special needs to play. The Fly gets its name from the former butterfly-shaped river viewing shelter that was built in the 1960s but demolished in the 1980s.

Hop on the St. Charles streetcar or take a ride down Magazine St from the downtown area to enjoy all that Audubon Park and its majestic Spanish moss-covered oak trees have to offer.