The Battle of New Orleans in 1814-1815, which concluded the War or 1812, highlighted the weaknesses in the coastal defenses of the United States. Determined that the country would be better protected, President Monroe directed that better fortifications be built along the Gulf and Atlantic Coasts. Among those built were Fort Pike and Fort Macomb (originally known as Fort Wood).

Fort Pike (and a sister fort, Fort Macomb) are two of the forts designed by French engineer Simon Bernard. They both have the same plans, design, and orientation, and serve the same function of protecting Lake Pontchartrain from invasion. It was built to replace another earlier defensive fortification, Fort Petite Coquilles, built by the French. Fort Pike is located along U.S. Highway 90, at the Rigolets, which is the northern pass access to the lake, from the Gulf of Mexico, by way of Lake Borgne.

Fort Macomb overlooks Chef Pass, which is the southern access to the lake from Lake Borgne. It is in ruins, and although it is visible from Highway 90, it is fenced in and is not accessible to the public. Situated adjacent to the fort is a marina, and it is possible to view the remains from several vantage points.

Both were built to defend New Orleans, but neither saw battle, even through the Civil War. Built from 1819-1826, Fort Pike was manned sporadically in the years that followed. In the 1830's, it was used as a staging area during the Seminole Wars, and again during the Mexican War in the 1840's. By 1861, it was in the command of a solitary force of one Sergeant, who was persuaded to surrender the fort to the State of Louisiana, without firing a shot.

The Union troops re-took the fort after the capture of New Orleans, but not before the retreating Confederate soldiers destroyed the guns, and burned the wooden structures. The union forces used it as a training facility, where freed slaves were trained in heavy artillery, before moving on to battle in other areas of the country. "Colored Troops," who later saw battle at Pascagoula and Port Hudson, also staffed Fort Macomb.

The State of Louisiana has tried to preserve both forts, but has been more successful with Fort Pike, now called the Fort Pike Commemorative Area. In contrast to years past, through the 1960's, Fort Pike today is protected by a fence, and a small admission fee is charged to visitors. There is a small museum inside, with historical highlights and artifacts. For most of the 20th century it has been a favorite place to have a picnic, while children would run through the caverns of the fort.

Fort St. John, most often referred to as Spanish Fort, was built by the Colonial French to protect New Orleans and Bayou St. John (an important trade route), at Lake Pontchartrain. It was rebuilt by the Spanish in 1779, and later restored by the Americans in 1808. During the latter19th century, Spanish Fort was a gathering place for picnics, swimming and entertainment. Today, it is nothing more than a brick wall protruding from the flood protection levee of Bayou St. John, just across the street from a residential subdivision.

Besides the fortifications on Lake Pontchartrain and on the Mississippi River, three other forts built to defend New Orleans are interesting, if not significant. These are Fort Massachusetts on Ship Island, Fort Livingston on Barataria Island, and Fort Proctor on the southwest shore of Lake Borgne.

Fort Massachusetts was one of the last forts of this class to be built. Construction began shortly before the beginning of the Civil War. By the time the war started, it had not been completed. The Confederates occupied it for a while before Union forces captured it. Construction continued during the war, and it served both as a prison for captured Confederate soldiers, and a training base for Union Colored Troops.

The significance of this fort is that it was built to protect New Orleans and the deep water on the western end of Ship Island, the staging site for two invasion forces attacking New Orleans - the British during the War of 1812, and Farragut's fleet in 1862.

Fort Massachusetts is located on the western end of Ship Island, one of several barrier islands that comprise the Gulf Islands National Seashore. It is located about a dozen miles south of Gulfport, Mississippi. Today the fort serves as a museum, and the island is a favorite destination for many who wish to use the beaches for swimming. Unless you have your own boat, access is only by charter companies who make regular runs to the island and back. It is a very long and hot boat ride, so dress accordingly.

Like so many other forts in the area, it never saw battle. Confederate forces occupied it for a while and abandoned it after the fall of New Orleans. In a bit of irony, one of the officers assigned to this fort's construction was P.G.T. Beauregard, later to become a Confederate general.

Fort Livingston is another of the New Orleans fortifications that can only be accessed by boat. I haven't visited this fort, so, at the present time, I can offer no suggestions for a visit.

Fort Proctor is unique. It is located on the Shore of Lake Borgne in St. Bernard Parish but is now completely surrounded by water, although it can be seen from the road at Shell Beach. Construction on Fort Proctor began in the 1850s, but the fort was never completed because of hurricane damage and the start of the Civil War.

Building defensive fortifications to protect New Orleans has always been a special challenge to Army engineers. The city has a really unique geography. It is nearly surrounded by water - lakes, the Mississippi River, bayous, marshes, and swamps. It was necessary to protect New Orleans, not only from naval forces entering the lakes, but those coming up the river, also.

South of New Orleans, two forts were built to accomplish this: Fort Jackson on the West Bank, and Fort St. Philip on the East Bank, opposite Fort Jackson. Together, they commanded the entrance to the Mississippi River. 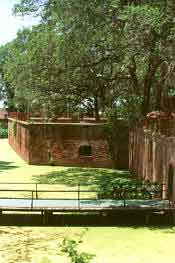 Fort Jackson, built upon the recommendations of Gen. Andrew Jackson, following the War of 1812, replaced an earlier fortification, Fort Bourbon, which was located less than two miles away. Fort Bourbon was an earth and timber breastworks redoubt built-in 1792. It was destroyed by a hurricane and eventually surrendered to the Mississippi River.

In his attack upon New Orleans during the Civil War, Farragut's fleet pounded both forts for ten days, before they surrendered to the Union forces. In the years that followed, Fort Jackson was used as a prison, a training facility, and fortified again during the Spanish American War, when disappearing guns with elevators were added, along with additional concrete bunkers. During World War I, it was once more used as a training facility, and then was retired after the war. Fort Jackson is located along LA Highway 23, at Plaquemines Bend (about 12 miles above Venice, LA), and is now accessible to the public as a historical tourist and cultural recreational center.

Originally built by the Spanish Governor at the same time as Fort Bourbon, Fort St. Phillip (Fort San Felipe) commanded the eastern side of the Mississippi River entrance, and was used through the Civil War. It, like its West Bank counterpart, Fort Jackson, was declared surplus after World War I. Fort St. Phillip is accessible only by boat, because it is several miles south of the end of LA Highway 39, in East Plaquemine Parish.

Camp Parapet, though not a fort, was one of several small fortifications built on the Mississippi River, in Jefferson Parish, by Confederate forces, to defend New Orleans from attacking forces coming down the river. Its function was similar to that of Forts St. Philip and Jackson. Today, all that remains is the Powder Magazine, a brick structure encased in a mound of dirt. It is located near the river, one block from Causeway Blvd., at the end of Arlington Street.

It is fenced in, surrounded by residences, but is available for visits and tours by appointment only, by calling the Jefferson Parish volunteer curator, at 504-833-8883. It is requested that planned visits include several people or a small group for the visit. There is no charge for admission