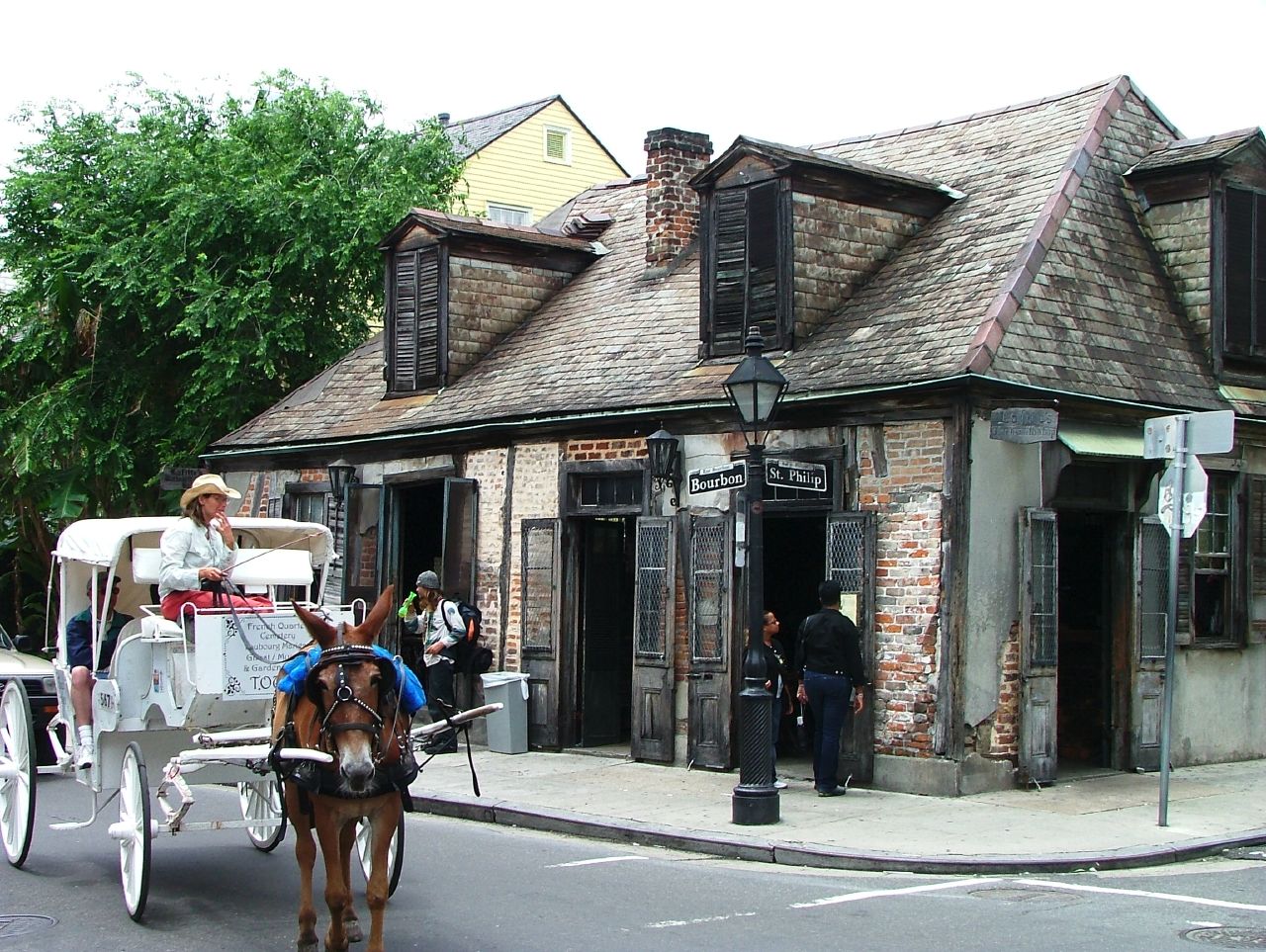 This building, now a tavern, is one of the oldest buildings in the French Quarter, and was reputedly once used by the privateer Jean Lafitte.

One of the all-time favorite tourist attractions of the New Orleans French Quarter is Jean Lafitte's Blacksmith Shop, on the corner of Bourbon Street and St. Phillip Street. It was built sometime before 1772, and is one of the few remaining original "French architecture" structures in the French Quarter.

Two devastating fires, one in 1788, and the other in 1794, all but destroyed New Orleans. Hundreds of buildings - businesses and residences - were destroyed. New Orleans, and Louisiana, was under Spanish rule at the time, and the city was rebuilt as a Spanish styled city, replacing what was a crudely built French port and trading post.

Tradition has it that the Lafitte brothers operated this blacksmith shop as a legitimate appearing business, serving as a front for their privateer enterprises. One of the brothers was the infamous Jean Lafitte, Privateer, and co-hero of the Battle of New Orleans. Rumor has it that his treasure is buried in everyone's backyard. There are many myths and rumors about the life of Jean Lafitte, but very little has been substantiated.

We do know that Jean Lafitte operated from Barataria Island in Barataria Bay, south of New Orleans. The local authorities knew where his camp was located, and even succeeded in overrunning it once. Because of his assistance to Andrew Jackson during the Battle of New Orleans, he received a Presidential pardon, and then disappeared into the foggy mists, for all time. Later, The United States built Fort Livingston on his island, and its ruins are there to this day. If you visit the Town of Lafitte, you may get a boat ride to the island.

For the past several decades, Lafitte's Blacksmith Shop, privately owned, is operated as a bar and restaurant, and is a favorite haunt for tourists and locals alike. I must confess, that back in the 1960's, I was a student at the Jean McCrady Art School, across the street and down the block. There were many nights when our class, having finished our work for the evening, would adjourn to the Blacksmith Shop for a cold nightcap. Today, it remains a popular gathering place, and a favorite haunt for the New Orleans Kats and French Quarter Rats.

If you like historic bars then take a look at our Historic Pub Crawl.