New Orleans is a city that occupies the spaces between the many waterways of Southern Louisiana. The Mississippi River cuts straight through the middle of the city, but visitors may not be aware that a large lake sits to the north of the city, as well. Lake Pontchartrain is an estuary (connected to the ocean through straits and passes) that's roughly 40 miles from East to West and 24 miles from North to South.

A body of water that size needed lighthouses to keep fishermen and travelers from running aground in days gone by, and we still have the chance to apprecate these glimpses of history. 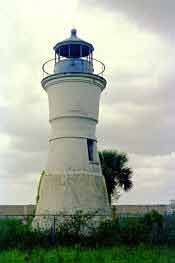 Built in the late 1830's, it still stands, though in disrepair, on what is now part of the University of New Orleans campus, the UNO Research and Technology Park, at the lake and Elysian Fields Avenue. Plans are to restore the lighthouse, and incorporate it into the design for a new hotel, which will be included in the Research Park facilities.

It isn't a very tall structure, mostly obscured by surrounding trees, and is now dwarfed by the new buildings being added to that part of the campus. You really have to know what you are looking for in order to find it, even in its prominent location.

Though useful and functional at one time, from the 1930's through the 1960's it was used as office space for the amusement park. Now, it appears, its remaining life will be for purely decorative purposes, though preserved as a landmark.

The New Canal Lighthouse, at the Coast Guard Station at West End, is probably the most recognizable to residents of New Orleans. The light, atop a square light keeper's house, is still functioning, and sits at the entrance to the Municipal Yacht Harbor, next to a number of seafood restaurants, and what remains of the entrance to the New Basin Canal. It is a landmark fixture, and has been the subject of numerous paintings and photographs.

It was originally built to mark the entrance to the New Basin Canal. The canal extended from Lake Pontchartrain along present day West End Blvd., Pontchartrain Blvd., turning toward the business district along what is now part of the I-10 (Pontchartrain Expressway), and ending in a turning basin approximately where the Superdome is today.

The Coast Guard Station moved to the lighthouse area in the early 1960's, and it is a base for rescue and marine safety operations. Prior, the USCG Station was located at the Lake Pontchartrain entrance to Bayou St. John, near Spanish Fort (Ft. St. John).

Known to local fishermen, but to hardly anyone else, is the West Rigolets Lighthouse, just opposite of Fort Pike, along U.S. Highway 90, at the Rigolets. It was built prior to the Civil War, as a small wooden building, on piers, with the light on the roof. Today, if you look west across the Rigolets, as you cross over the bridge, you can see it if you know what you are looking for. It is easy to mistake it for one of the many fishing camps along the shore of the lake.

Technically, it would be accessible by land, if you have some hip boots, and if you know the right person (and watch for snakes). The road leading towards the lighthouse (through the area once occupied by the old Fort Pike hospital) is fenced off, with a locked gate. It has been abandoned for over half a century. 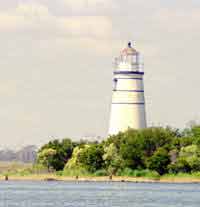 A delightful little visual surprise is the Tchefuncte River Lighthouse, which sits at the mouth of the Tchefuncte River, on Lake Pontchartrain, in Madisonville. This lighthouse was also built prior to the Civil War, and had also been destroyed and rebuilt, like so many others. Though it is supposedly still functional, it is not in use at the present time. It stands 43 ft. high, of brick and stucco construction, and was fitted with a fifth order fresnel lens.

It is also accessible mostly by boat, unless you care to wade through high marsh grasses, wearing boots and watching for snakes. The lighthouse was turned over to the town of Madisonville by the U.S. Coast Guard, and is intended to be one of the area tourist attractions in a proposed recreational area. The original light keeper's house has been moved upriver into the town of Madisonville.