June 6, 2000 marked the opening of the National World War II Museum in New Orleans. It honors those who fought in World War II, and also those who stayed behind to build the tools and weapons that the military needed for the war effort. The sidewalks are paved with bricks bearing the names of World War II veterans. My father's name is on one of those bricks.

One of the main attractions of the museum is an exact reproduction of the Higgins Landing Crafts (produced by the Higgins Boat Project) that were used, not only at Normandy on D-Day, but in the Mediterranean and in the Pacific. In addition, you will see some vintage WWII aircraft (including a U.S. Avenger, and a British Spitfire), military weapons, armament, and artifacts form that era. In December of 2002, the museum opened its Pacific Wing, to honor those wh faught the war in the Pacific. It will be an eye opener for those who are too young to feel the importance of that war, in terms of national and personal survival. 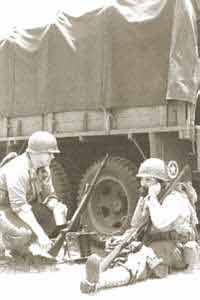 For those who want to learn more of the history, there is a small theater for viewing WWII film clips, and galleries filled with photographs, and the written and oral accounts many of the battles fought during the War, as told by the veterans. It is important to note, is that for every story that is told, there are hundreds, if not thousands of untold stories, which can't be told.

Many of the veterans came home to pick up their lives, and refused to talk about the war. They just wanted to forget. Often, when one of these veterans would open up, it would only be an account of some insignificant, humorous incident. You might think that all of the fighting and killing would harden them. Not at all. They didn't like the job, and it only reaffirmed their profound respect for life, and for freedom.

New Orleans has a long history and partnership with this country in its national defense. It began in 1805, when the U.S. Revenue Cutter Louisiana first defended the sovereignty of U.S. territorial waters off of the mouth of the Mississippi River, and again in 1814-1815, with the Battle of New Orleans. Jackson Barracks, still an active military reservation, is named for New Orleans hero, General (and later, President) Andrew Jackson.

Built in 1834, the Jackson Barracks marks the eastern boundary of New Orleans as it meets St. Bernard Parish. Originally called the New Orleans Barracks, it housed soldiers serving in the United States infantry companies. Its role in the Mexican–American War, New Orleans Barracks was used for sending and receiving troops. During the Civil War, Confederate forces took over the Barracks and controlled it for less than a year before Federal forces re-captured it. Today, its antebellum styled officer's quarters are still used by officers assigned to the National Guard, Air National Guard and Reserve units located there.

During World War II, Camp Plauche, built on the western outskirts of New Orleans, at the base of the Huey P. Long Bridge, and Camp Leroy Johnson, built at Lake Pontchartrain, were used to hold prisoners of war. Camp Plauche was named for Major Jean Baptise Plauche, who served with Andrew Jackson. It was at Camp Plauche that the 765th Transportation Battalion was formed. My grandfather was the commissary manager for Camp Plauche, in those days. 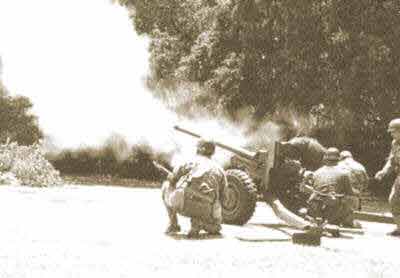 Camp Leroy Johnson Naval Air Station was located at the site of the present main campus of UNO, at Elysian Fields Ave. and Lake Pontchartrain. UNO, which was known as LSUNO at the time, moved into the facilities in 1958. I remember, as a young boy, watching the fighter planes (WWII single engine prop aircraft) as they would take off. The eastern end of the runway was just about where the Student Union Building stands today. Now, only a smokestack and one of the barracks buildings on the campus remain to testify to its history. 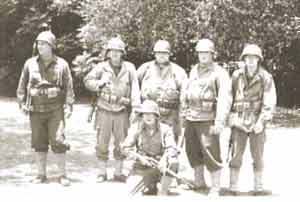 People think of the Michoud Assembly Facility as the NASA manufacturing plant for the Space Shuttle's external fuel tanks. It is that, and in the 1960's, it was the assembly site for the Saturn 1B and Saturn 5 rocket boosters. Michoud has a very long history, too. In 1940, the U.S. Government purchased 1,000 acres of what was originally a French Royal Land Grant of 1763, to build an assembly plant. Then, in what was the largest building in the world, the U.S. built plywood cargo planes and landing craft for the war effort. Later, during the Korean Conflict, it was used for the production of 12-cylinder air-cooled engines for Sherman and Patton tanks.

Another military facility still active is Alvin Callender Field, the U.S. Naval Air Station in New Orleans, at Belle Chase, named for a World War I hero, Alvin "Sandy" Callender. On any given day, you can see the arrival or departures of state-of-the-art jet fighters, military transport and cargo craft, and attack helicopters. Units from Alvin Callender Field participated in the Gulf War against Iraq, in Yugoslavia and in the fight against terrorism.