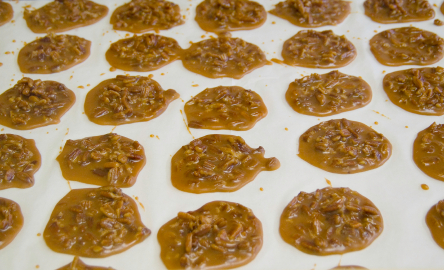 What Is A Praline?

Pralines are a confection that's made with pecans and look like a cookie. However, they’re not actually cookies. Pralines are a creamy-crumble candy patty that are made from butter, cream, sugar and of course Louisiana grown pecans.

Pralines are made by combining sugar, butter and cream in a pot at medium-high heat. The chef constantly has to stir the mixture to prevent it from boiling over until most of the water has evaporated and it’s become a thick texture that’s brown in color. Then the chef drops the mixture on to wax paper and leaves it cool before adding the pecans. (Check out the recipe below for more detailed instructions.)

Praline is pronounced “Prah-Leen” by native residents of New Orleans.

Pralines can be tracked back to Europe where they originally made the treats with almonds.

Anyways, originally pralines were made with whole almonds individually covered in caramelized sugar. The New World had been settled and pecans had been discovered by North America’s newest residents, but the chefs back in Europe used local, easy to get and relatively cheap almonds.

Fast forward a few years and French settlers brought this recipe to Louisiana. The exact date it was first made in the New World is disputed, but it was roughly the 18th or 19th century depending on who you ask.

In New Orleans during the 19th century, chefs substituted the almonds with pecans and added cream to make a thicker confection.

New Orleans Famous Praline Company: A retailer of hand made pralines, based on a century old New Orleans recipe.