Running Of The Bulls 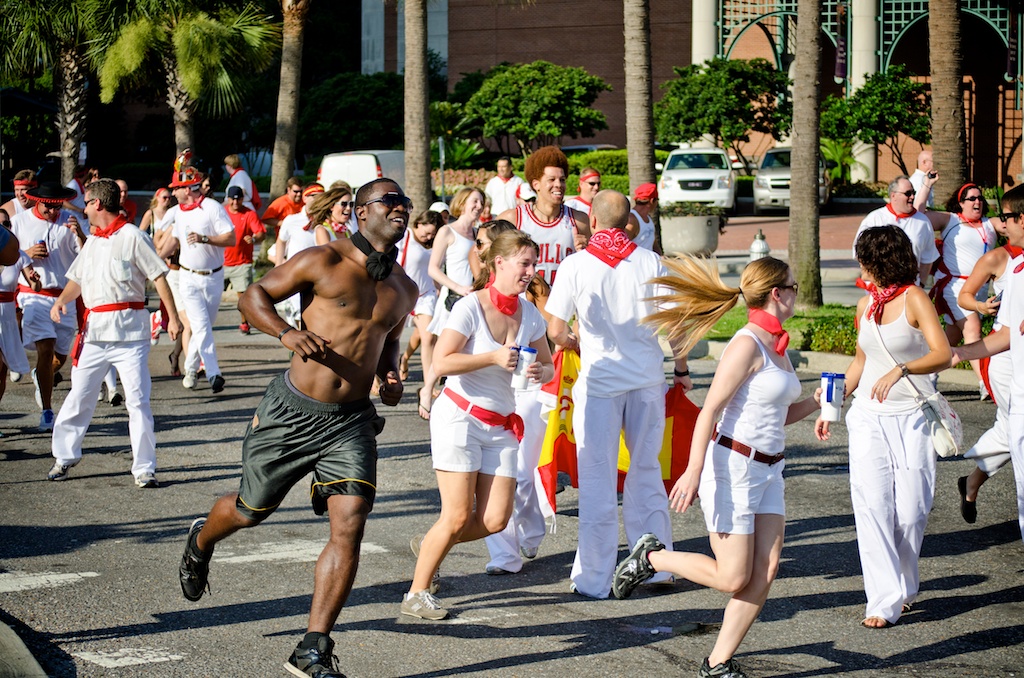 Here, the brave souls that dare to participate in the Encierro are not chased by vicious bulls. Instead, they’re chased down the streets of New Orleans by the ferocious members of the Big Easy Rollergirls, along with their meanest counterparts from around the country.

The Rollergirls attack runners with foam filled plastic bats and attempt to "gore" those that can’t out run them with plastic horns attached to their helmets. However, there may or may not be alcohol involved on the part of the runners to lessen the sting. Some participants even consider getting beat with the bats or gored by a RollerBull as a badge of honor.

The first Running of the Bulls took place in the French Quarter back in 2007 with just 200 fearless participants and 14 RollerBulls.  Now some 14,000 runners and 400 RollerBulls ran through the streets.

Runners are required to register beforehand, and to wear white shirts, white pants/shorts, and a red cloth around their waist and neck.

The run takes place on Saturday morning at 8 a.m. However, you don’t want to miss the pre and post parties that run throughout the extended weekend.

Friday night there’s the Txupinazo (pronounced el choo-pee-naht-so), which promises to bring you as close to Spain as you can get without actually being in Spain.

Saturday night, after you’ve had some time to recover from the running of the bulls, there’s the La Fiesta de Pantalones.

Sunday, the awesomeness wraps up with the El Pobre de Mi (Poor Me), a chance to recover from the hangovers and bruised backsides. The Annual Ernest Hemingway Celebration and Talent Contest takes place at this event too, which includes readings of Hemingway by local authors, a Hemingway Lookalike Contest and a whole lot of fun.

Remember - run at your own risk!  These "bulls" may not be as dangerous as the ones in Spain, but they won't take pity on you either.