St. Patrick’s Day isn’t just one day in New Orleans; here, it’s turned it into a multi-week celebration with parades, block parties and plenty of corned beef and cabbage.

For all of the details, including maps of parade routes, times and more visit St. Partick’s Day New Orleans.

New Orleans is known for its French influence and Spanish culture, but the Irish have left their thumbprint on the city too.

Dating back to the seventeenth century, the Irish immigrated to the United States in search of a better life for themselves and their families. Many of these immigrants ended up in South Louisiana. During the 1830’s, the Irish were the labor that built the New Basin Canal, a shipping canal that connected Uptown with Lake Pontchartrain. Depending on whose records are most accurate, somewhere between 4,000 and 30,000 Irish workers died from yellow fever while building that canal. Many of those who were lucky enough to survive settled into an area south of Magazine Street that became known as the Irish Channel, and they worked at the nearby Port of New Orleans.

That Irish heritage, as well as all Irish history and culture in general, is celebrated every March 17 with parties and parades throughout New Orleans. 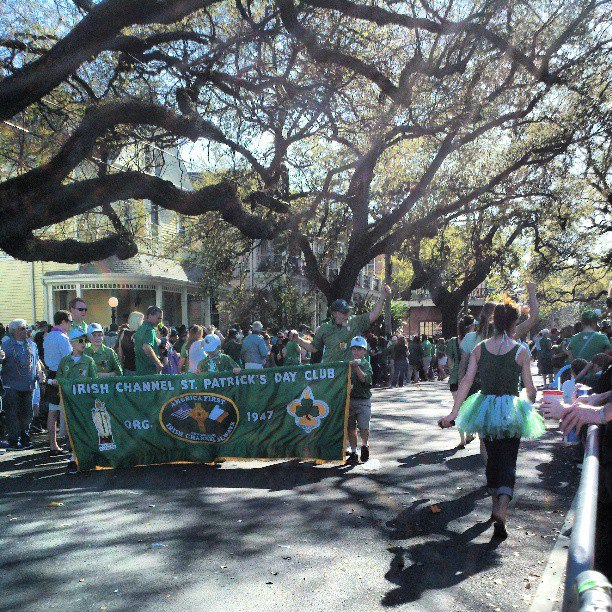 Molly’s at the Market hosts a French Quarter parade with riders in carriages and marching groups. Starts at 6  p.m. at 1107 Decatur Street.

The Downtown Irish Club Parade starts at 6:30 p.m. in the Bywater and travels through the French Quarter, making several pit stops at local drinking establishments as it heads towards Bourbon Street.

The Irish Channel Parade is an annual favorite through the Irish Channel and Garden District. Parade starts at 1 p.m. at the St. Mary’s Assumption Church. There are Irish themed floats, marching bands, countless men dressed in tuxedos and plenty of green beads. Keep an eye out for cabbage…to make corned beef and cabbage later, of course.

Metairie celebrates St. Patrick’s Day with a parade starting at noon. It’s a favorite for both kids and adults. The parade starts in front of Rummel High School on Severn Avenue.

Saturday prior to St. Patrick's Day, March 17 (unless the 17th falls on a Saturday)

Tracey’s  St. Paddy’s Day Party - An annual celebration in the Irish Channel, with lots of corned beef and cabbage, Irish beverages and green beer located near the end of the Irish Channel Parade. Tracey’s is located at 2604 Magazine Street.