The Chalmette Battlefield and National Cemetery is about 7 miles downriver from the New Orleans French Quarter. This historic site is a monument to two of the most significant wars in U.S. History, both having major implications regarding the survival of the nation. Each year, in January there is a reenactment of the battle, by volunteers, wearing authentic period uniforms, with exhibits of authentic armaments, tents, cooking utensils, and historical discussions about the battle. 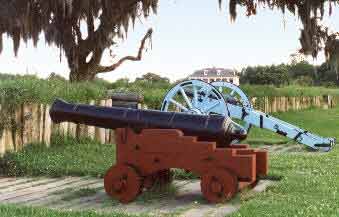 The Battle of New Orleans in 1814–1815, the last battle of the War of 1812, forever ended any attempt by England to regain control of the American Colonies, lost during the American Revolution, the War of Independence. It was here that General Andrew Jackson, and local volunteers, including Jean Lafitte (the pirate) and his men, defended the city from the invading British. The British troops were under the command of General Pakenham, who died in the final battle, January 8, 1815. Today, one can walk the ramparts, the recreated defenses extending from the Rodriguez Canal at the Mississippi River to what was then the tree line of the cypress swamp, at the northern end of the battlefield.

Adjacent to the battlefield, is the United States Civil War Chalmette National Cemetery, honoring Civil War soldiers who died on both sides. Those buried there include members of the famous Buffalo Soldiers. The cemetery sits on a tract of land which is approximately where the British artillery was located during the Battle of New Orleans. Both of these sites are maintained by the National Park Service, and are open to the public.

The U.S. Department of Veterans Affairs website has searchable databases, listing the soldiers who are buried at this location, The Union Army and the Confederate Army.

Also located on the Chalmette Battlefield grounds, and serving as a museum and visitor center, is the Malus-Beauregard House. This plantation looking house was never used as a plantation. The house, built in 1830  is named for René Beauregard, its last owner, the son of the Civil War Confederate General, P. G. T. Beauregard (whose monument is at the entrance to City Park, at the north end of Esplanade Avenue). While many visitors arrive by automobile, many also arrive by riverboat, the Chalmette Battlefield being part of the tour.

Additional artifacts of the Civil War can be seen at the Confederate Civil War Museum, located in downtown New Orleans, 929 Camp Street, just one block from Lee Circle.