Top 10 Places to Spot A Spirit in NOLA

Discover the "Boo Carré" and Beyond on a Ghost Tour

It’s not just what you see in New Orleans that will amaze you –  it’s what you might not see. Scare up a few extra bucks and tour the “Most Haunted City in America” with an educated, entertaining guide who can bring the dead to life for you.

We recommend some of these cool opportunities to learn about the legends and folklore that has helped make New Orleans famous.  Why just come here to drink spirits when you might actually get to see one?

On the NewOrleansGhostAdventuresTour, you can tour New Orleans famous above-ground cemeteries or “Cities of the Dead” and hear spooky tales along the way from actual historians. This company also gives you the chance to step inside these old houses at night, rather than just view them from the curb. You’ll hear about famous New Orleans Voodoo Queen Marie Laveau and witches from real historians.

Prefer a night tour? Gray Line Tours offers a nigh time Ghosts & Spirits Walking Tour that’s sure to send a chill up your spine. You will tour allegedly haunted sites previously featured on those ghost shows we all love on cable TV. You can also view a genuine “vampire slaying kit”, relics of a real voodoo ceremony, and more. They invite you to bring your camera because you never know who you’ll spy lurking in the background of your selfie.

The tours ought to get you started exploring the "haunted" history of New Orleans. 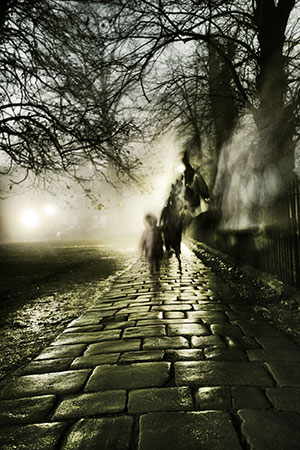 If you enjoy a good ghost story, you’ll love these New Orleans ghost tours—they’re a scream!

Until You Get Here…

Below is some information on other sites rumored to be haunted in New Orleans to conjure up your appetite for adventure!

Hotel Provincial
www.hotelprovincial.com
During the Civil War, the Hotel Provincial was used as a hospital for Confederate soldiers. Guests and maids have told of encounters with ghostly men on crutches and spirit surgeons. Once, a security guard said he stepped off the elevator onto the second floor into a hospital scene from the past -- nurses rushing frantically from patient to patient. He stepped back into the elevator without saying “boo.”

St. Louis Cathedral
www.stlouiscathedral.org
In 1769, a group of French rebel leaders were executed by the Spanish for insurrection against the crown. To set an example, the bodies were left outside in Jackson Square to rot in the heat and rain. The French community was horrified, but no one was brave enough to challenge the Spanish leaders. Then nothing short of a miracle occurred. Pere Dagobert, the beloved priest of the Church St. Louis, later St. Louis Cathedral, showed up at the homes of the slain men and summoned their families to the church where to their amazement they found the bodies of their loved ones. It’s a mystery to this day, but somehow, under the watchful eyes of the Spanish soldiers, the priest had recovered the bodies. Then in a terrible rainstorm, Pere Dagobert performed a funeral mass and led the procession to Saint Louis Cemetery No. 1. Today, on rainy mornings before sunrise, some say they hear Pere Dagobert singing the Kyrie.

Le Petite Theatre du Vieux Carré
http://www.lepetittheatre.com
At Le Petite Theatre du Vieux Carré, right off Jackson Square at 616 St. Peter Street, it has been rumored that you might bump Caroline, an actress who performed here in the 1930s. One day, while joking with a director on the third-story balcony, she tumbled over the railing. According to legend, she slammed to the courtyard below where she died, dressed for the evening’s performance in a white wedding gown. But Caroline isn’t the only legendary ghost haunting Le Petite. Others include the Captain, the suitor of another actress who used to perform here. There have been reports that he settles into his balcony seat while modern-day actors rehearse in hopes of catching a return performance by his lover.

Ursuline Convent
https://en.wikipedia.org/wiki/Old_Ursuline_Convent,_New_Orleans
Ursuline Convent at 1100 Chartres Street, the oldest building in the Mississippi Valley, is rumored to have a few ghosts – vampires, even. In the 1700s, the Catholic Diocese sent young girls from the French convents to New Orleans to find husbands and spread Christian values. They carried coffin-shaped chests as their suitcases. The chests were called “caskets,” and the young women became known as “the Casket Girls.” According to superstition, the caskets held vampires from the old country, and they were stored unopened in the attic, sealed shut with nails and screws blessed by the Pope himself. Legend has it that in the 1970s, after spotting a set of the attic’s shutters half open, two ghost hunters hid in the convent’s courtyard to try to catch the vampires on film. Legend has it that their bodies were found the next morning, drained of blood with a few mysterious scratches. (Those in the know say the shutters said to have been sealed shut with nails were installed 100 years later to protect from hurricanes.)

LaLaurie Mansion
One of the most notorious haunted houses in America is LaLaurie Mansion at 1140 Royal Street. In 1832, Creole socialite Delphine LaLaurie and her doctor husband moved to these splendid quarters, where they entertained lavishly. But although Madame LaLaurie was quite beautiful, she was also quite mad – a murderess, in fact. Come learn all about her on a visit to this historic home, once owned by actor Nicholas Cage.

We hope you have an experience you’ll remember for the rest of your life!