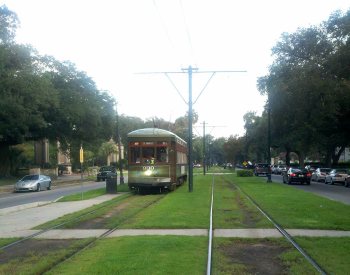 Other cities have trolleys, here in New Orleans we have streetcars and they’re as much a part of the city as red beans & rice on Mondays. Here they’re as much of a tourist destination as they are a means for commuters to get to and from their office.

Information About Riding The Streetcars

Price is just a $1.25 per ride and $0.25 per transfer. You can by an all day pass that gives you access to all 3 lines for a bargain at $3. You'll pay for your ride when you board the streetcar using cash or coins. Don't worry if you don't have exact change - a credit for future rides will be issued with the excess amount.

Besides during Mardi Gras parades, the streetcars runs from early morning to late into the night. During peak hours, you’ll never have to wait longer than five minutes for the next streetcar.

Visit the New Orleans Streetcars official website for schedules and routes. WDSU's Transit Tracker is also a great tool for keeping track of the streetcars. Download on Android or iPhone and you'll have the location of every streetcar in motion at your fingertips.

The New Orleans streetcars have the distinction as one of the first passenger railroads in the United States and one of the oldest continuously operating street railway in the entire world.

The first streetcars to travel through the suburbs or as we like to call them the fabourgs ran on steam. After the Civil War, an ex-Confederate general leased the streetcar line and replaced the steam locomotives with horse power. It was a step back technology wise and less efficient, but they were quieter and ended up staying around for twenty years before they were replaced.

There were attempts to replace the horse drawn streetcars with ammonia powered engines, steam dummy engines and electric batteries, however it wasn’t until 1893 that electricity replaced horse power. It’s the power system that’s still used today.

As the city grew, so did the network of streetcars. In the early 20th century a number of private companies operated various lines competing with each throughout the city. However, there were a number of problems including inconsistent service for the riders and costly inefficiencies for the owners. The result was the city coming in and creating an organization called the New Orleans Public Service Inc. (NOPSI), which took over running the street cars. Eventually, the NOPSI would be replaced by New Orleans Regional Transit Authority that run the streetcars today.

Throughout the history of New Orleans, Canal Street has been an important route of travel. Mule-driven carriages were the first form of public transit along this line, but in 1910 they were replaced by streetcars.

In the 1960’s buses became popular all over the country, including in the Crescent City. Bus lines started to replace streetcars and residents started to worry that all of the historic streetcars would disappear.

In many cases their fears were realized. In May of 1964, the streetcars were completely removed from Canal Street. Luckily, in 1973, preservationists succeeded in adding the St. Charles line to the National Register of Historic Landmarks. Because of that Historic status, the St. Charles streetcars look and  run as they were in 1920.

Fast forward a few years and the Riverfront line was built in 1988. It was the first new line to be built in New Orleans since 1926.

After being absent for forty years in 2004, the Canal Street line was brought back to life.

The newest addition is the Loyola Avenue line that connects Canal Street with the Union Passenger Terminal. It began running just in time for the Super Bowl in 2013.

A ride along the St. Charles Avenue is much like a journey through the history of New Orleans.

Today’s streetcars on this line still have the mahogany seats, brass fittings and exposed light bulbs from an era before plastic seats and aluminum rails.

The St. Charles Avenue line travels 13.2 miles starting just across the street from The French Quarter at Carondelet and Canal Street. It travels through the Central Business District, the oldest part of the city on that side of Canal Street, through the beautiful Garden District and into the picturesque tree-lined streets of Uptown.

Along the way, the streetcar line passes hundreds of exquisite homes, historic monuments, the lush grounds of Audubon Park and both Loyola and Tulane universities. Not to mention the dozens restaurants and famous hotels along the way. It’s a perfect way to see the rest of the city outside of the French Quarter.

The Canal Street Line travels almost six miles, starting at the Mississippi River and following Canal Street into the middle of the city. It brings riders to historic cemeteries or via a spur to City Park and the New Orleans Museum of Art. It also brings visitors within walking distance of the Fairgrounds Racetrack that features horse racing many months of the year and is the home of the annual Jazz & Heritage Festival every spring.

This line is popular with locals traveling to work, as well as visitors exploring the city. Along the way, it passes by art galleries, entertainment venues, numerous shops and dozens of delicious restaurants.

Unlike the St. Charles Line, the fleet on this line is a bit more modern, yet hasn’t lost the historic touch that is New Orleans. You’ll notice the difference especially in the summer months, these streetcars have air conditioning.

For maps and schedules, click here or here (City Park/Museum).

The Riverfront Line was a dream come true for New Orleans business owners, developers and streetcar fans. It connects locals, conventioneers, and visitors to points along the Mississippi River.

The Riverfront Line travels 1.5 miles past the legendary French Market, to the Aquarium of the Americas, shopping at the Riverwalk and the Ernest M. Morial Convention Center.