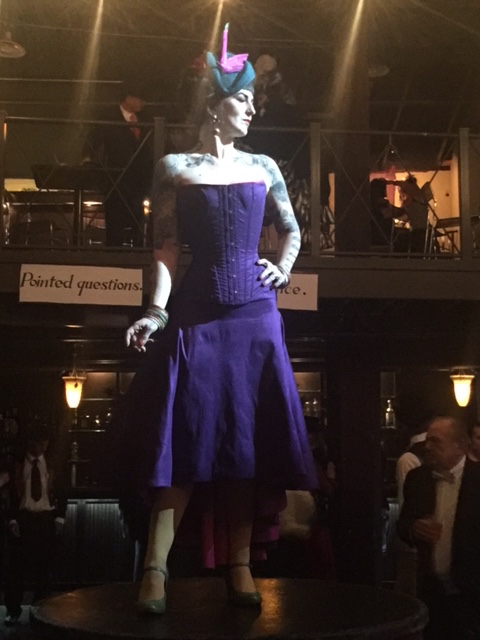 If you were looking for an evening at Downton Abbey, forget it. The first annual Edwardian Ball in New Orleans was more like a “steampunk Mardi Gras” than it was an evening with the Crawley’s.

On Saturday, March 25 – just a couple weeks after Carnival Season ended in New Orleans – the city slipped into fantasy mode once more for the World-Famous Edwardian Ball, a popular West Coast event making its debut in NOLA. The event was billed as “an elegant and whimsical celebration of art, music, theatre, fashion, technology, circus, and the beloved creations of the late, great author and illustrator Edward Gorey.” The theme for 2017 was “The Deadly Blotter,” Gorey’s alphabetical whodunit classic.

While Generations Hall was filled with fascinating entertainers who wandered from room to room delighting guests, just as intriguing were the costumes created by the party-goers themselves. Men wearing be-antlered headpieces and light-up steampunk goggles. Women stuffed in tight-fitting bustiers, wearing fiber-optic wigs and fascinators. Bobbies that looked like they might be chasing Jack the Ripper. And mysterious men in top hats and tails who made you wonder if the Vampire Lestat might just be back in his beloved New Orleans. If there’s a shortage of false eyelashes and whiteface at your neighborhood CVS this week, now you know why.

For the most part, The Edwardian Ball provided yet another excuse for New Orleanians to costume and go out and play. If you decide to attend next year, fork up a couple more bucks and secure seats on the VIP balcony where you can sip absinthe (Edgar Allen Poe’s drink of choice) and marvel at the entertainment and dancing below. For more information on the event, visit www.edwardianball.com.