Big Easy Rollergirl: 'We're coming to get ya!'

We're counting down to New Orleans' own Running of the Bulls this Saturday, but we have a question: Just who are these bulls we're running from?

They're not real bulls, like in Spain. We know that they're members of the Big Easy Rollergirls. But other than that? We're a little in the dark.

Lauren Soboul, a.k.a. CHEAP THR!LLS, will be one of the horns-on-wheels Saturday. She's been nice enough to let her interview her about being a Big Easy Rollergirl, their costumes for Saturday and more. Just don't expect her to be so nice if you're running from her on Saturday. 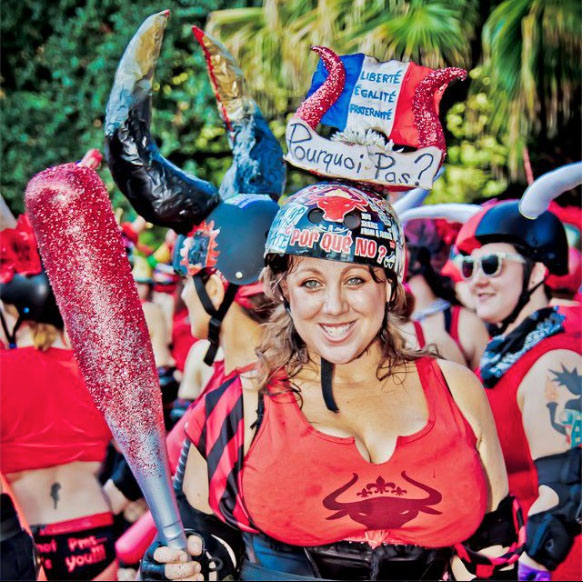 Q:  How did you get your nickname? Do you think it fits?

CHEAP THR!LLS:  I chose CHEAP THR!LLS because I love simple pleasures and don't think you need to spend a lot of money to live a full life. I also love the album Cheap Thrills by Big Brother & the Holding Company. I think the name well fits me and my attitude towards life. My league mates must agree because in 2007 I won the Fleur de Wheelie (our end of season awards) for Nomme de Pummel: Rollergirl Most True to Her Name. I realize how often the meaning of my name gets misconstrued, but I don't mind if people underestimate me. Just because I love cheap thrills doesn't mean I am one.

Q:  Have you ever done this event before? (If you have, then what's been your favorite part? If not, what are you looking forward to the most?)

CHEAP THR!LLS:  I am lucky to say I am an original Rollerbull and have been involved in the event since the first year. I've never missed a run, even one year when I had to leave for a trip and went straight the airport in full bull attire. In 2007, there were 13 bulls and we felt successful to have about 150 runners show up to the event. I love how it has grown and seeing friends from other leagues each year. I love seeing the creativity and individuality in each bull. It is a full weekend of awesome and a definite highlight of the year. I think my favorite part is the electricity in the air during that last minute of anticipation as bulls and runners wait to be released. The adrenaline is euphoric.

Q:  Did you have to do any kind of special training to get ready for this event?

CHEAP THR!LLS:  We are Rollerbulls once a year, but roller athletes every day. Playing roller derby is a full time job and training is rigorous. That is what we do. Participating in the Running of the Bulls is lagniappe and a welcome change of pace. Roller derby is hard work!

Q:  Are you worried about falling on the uneven streets of New Orleans? What's the worst spill you've ever taken?

CHEAP THR!LLS:  No, I’m not worried about falling. NOLA streets can be treacherous but roller derby involves a lot of falling so we’re used to it. We train to fall safely and get back up quickly at fast speeds in the middle of a jostling pack of skaters. At least if we fall during ROTB there are people who will stop to help you up and ask if you’re ok. There’s a great sense of camaraderie. And we wear knee pads, just in case. I’ve never taken a bad spill during ROTB, but I’ve witnessed a few. Personally, my worst spill happened at practice in 2007, when I broke my ankle in four places. Whoops a daisy! Not like I let that hold me back for long…

Q:  Did you have to make your own costume? Any significance in it?

CHEAP THR!LLS:  As the event grows we’ve had to import extra rollerbulls from our sister leagues around the country, so you commonly see red shirts with league names on the front and skater names on the back. Some people get into full costuming but most keep it basic with the focus on horns, the true pièce de résistance for any bull. Some skaters work on their horns for months leading up to the run. The creativity and artistic expression has become such a big part of ROTB that NOLA Bulls started holding a contest for the best horns at El Txupinazo on the Friday night before the run. That is truly an event to behold! Usually, my own horns are simply crafted but I made an exception last year when ROTB fell on Bastille Day. I created a Bastille Bull costume with special horns flying the French flag. But those won’t work this year so I’m making new horns. At the last minute, of course!

Q:  How hard do you actually hit people? Should we be scared?

CHEAP THR!LLS:  Pretty hard! We’re not looking to injure or bully anyone but it’s gonna sting! But hey, it’s not like you’re getting gored by a real bull. And you have an entire weekend of festivities to soothe your ache.

CHEAP THR!LLS:  DO NOT TOUCH THE BULLS! Don’t try to take their bats. Stay on the sidewalk if you don’t want to get hit and don’t let children get underfoot. This event is a lot of fun but can be frenzied and irresponsible behavior makes things less enjoyable for all. Also, this is not Walking of the Bulls. If we see you strolling along, we’ll assume you slowed down because you think you’re not getting hit enough. Now put on your running shoes because we’re coming to get ya!!

Check out www.bigeasyrollergirls.com to see what the Big Easy Rollergirls do the rest of the year.