French Quarter Wine Fest Puts a Cork in It 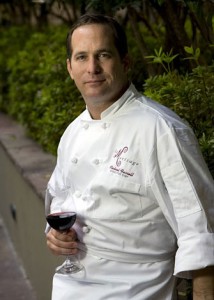 After two months of anticipated wine tastings, thoughtfully paired with cuisine by chef Michael Farrell of Le Meritage Restaurant, the French Quarter Wine Festival will come to its close this Friday.

Maison Dupuy Hotel, which houses Le Meritage, hosts New Orleans’ yearly celebration of wines from all over the world. This year’s festival offered eager oenophiles the chance to taste a range of vintages and blends, including Darioush’s signature Bordeaux-style estate wines, pinot noir and chardonnay from Patz & Hall, barolos and barbescos from Italy’s Pio Cesare vineyards, and S.A. Prum’s world-renowned German rieslings.Chef Farrell’s Southern Coastal cuisine, available at Le Meritage by the diner’s choice of a small or large plate, provided apt accompaniment to each wine showcased at the fest’s biweekly four-course dinners.

On Friday, attendees will be able to sample a wide variety of bottles, including some slotted to be poured at next year’s festival. Farrell will serve a buffet designed to harmonize with the evening’s featured wines, while the YaDonna Jazz Trio does some harmonizing of their own. So, if you missed Wine Fest this year, just come out on Friday to get a jump start on next year!