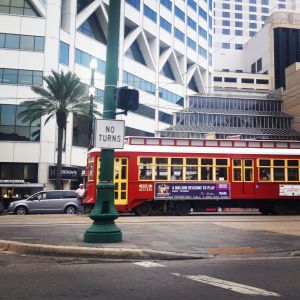 Celebrities, then and now have spent a lot of time in New Orleans. Writers have penned epic novels in and about the Big Easy. Musicians have created masterpieces while living in the city. Today, actors, actresses and film crews make this city the backdrop for their movies and television shows.

After spending time living here or just visiting, it’s no surprise that many of these celebrities have been quoted about New Orleans.

There’s hundreds of quotes from celebrities about New Orleans, here a few of our favorites…

In the spring of 1988, I returned to New Orleans, and as soon as I smelled the air, I knew I was home. It was rich, almost sweet, like the scent of jasmine and roses around our old courtyard. I walked the streets, savoring that long lost perfume.
Anne Rice – Author - in Interview With the Vampire

New Orleans food is as delicious as the less criminal forms of sin.
Mark Twain - Author

I fell in love with the place! You know, the people, the bourbon, the music... it's in the air. It's something you can't describe on camera.
Brad Pitt - Actor

To be engaged in some small way in the revival of one of the great cities of the world is to live a meaningful existence by default.

I'm not going to lay down in words the lure of this place. Every great writer in the land, from Faulkner to Twain to Rice to Ford, has tried to do it and fallen short. It is impossible to capture the essence, tolerance, and spirit of south Louisiana in words and to try is to roll down a road of clichés, bouncing over beignets and beads and brass bands and it just is what it is.

We dance even if there's no radio. We drink at funerals. We talk too much and laugh too loud and live too large and, frankly,we're suspicious of others who don't.

It is home.
Chris Rose- Author - One Dead in Attic

You find as a writer there are certain spots on the planet where you write better than others, and I believe in that. And New Orleans is one of them.
Jimmy Buffett - Singer

If I had grown up in any place but New Orleans, I don't think my career would have taken off. I wouldn't have heard the music that was around this town. There was so much going on when I was a kid.
Pete Fountain – Jazz musician

In America, I would say New York and New Orleans are the two most interesting food towns. In New Orleans, they don't have a bad deli. There's no mediocrity accepted.
Mario Batali – Celebrity Chef

If I could put my finger on it, I'd bottle it and sell it. I came down here originally in 1972 with some drunken fraternity guys and had never seen anything like it — the climate, the smells. It's the cradle of music; it just flipped me. Someone suggested that there's an incomplete part of our chromosomes that gets repaired or found when we hit New Orleans. Some of us just belong here.
John Goodman - Actor

If you love New Orleans, she’ll love you back.
Drew Brees - Saints Quarterback.

There is something about New Orleans that embodies passion; I've never seen that before. There's something tangible about the essence of the city. You can taste and smell it.
Blake Lively - Actress

In America, I would say New York and New Orleans are the two most interesting food towns. In New Orleans, they don't have a bad deli. There's no mediocrity accepted.
Mario Batali - Chef

If you're open to it, New Orleans will teach you about yourself, but if you want to hide from who you really are, the city will help you do that, too.
Laurell K. Hamilton

I’ve lived in N.Y. and L.A. for many years, but I still gravitate to New Orleans – it’s so unique and so European. There’s nothing else like it in the country. It has its own music, its own food, its own style and its own way of life.
Bryan Batt - actor

Please send us your favorite New Orleans quote and we’ll possibly add it to this page.