'Death of a Salesman' premieres at Le Petit Theater 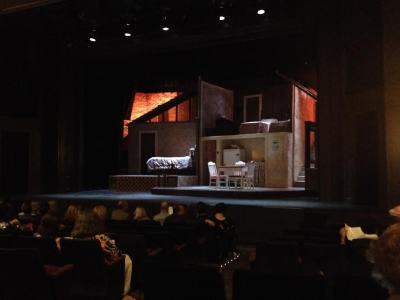 There are a lot of great aspects of New Orleans, but one of our favorites is the city’s thriving theatre culture.  With many talented actors, directors and theatre managers living in New Orleans, you don’t have to go far to watch quality productions. Le Petit Theater’s premiere of Arthur Miller’s Death of a Salesman Friday didn’t disappoint.

Rain was heavily falling, but the harsh weather didn’t keep the audience away – seats were filled. Le Petit Theater is one of our favorite places to watch live theatre in New Orleans. It’s a great size – intimate, but large enough to feel like you’re experiencing the play with a larger audience.  Plus, the theater décor is really cute, and the set designs are awesome.

Even though Death of a Salesman is a renowned play, neither my date nor I had ever seen it before, so we were excited.  We even knew a few of the incredibly talented actors performing (often another perk if you live in New Orleans). To put in simply – the play was riveting.  Author Miller creates a very interesting story, intertwining the complexities of family dynamics, betrayal, reputations and dementia. The play really brought you into lives of these characters, especially the father’s role played by George Sanchez. He was a sad but likeable character, plagued with the all-consuming illusion that his reputation was more important than his reality; that proves an unforgivable dispute between him and his son.  The play also beautifully developed the eldest son's character, Biff, played by Garett Prejean. There were painful issues between Biff and his father that were utterly unresolvable, but the love was always apparent.

All in all, the production brought about a compelling story, provoking empathy with both laughter and tears. While the play was originally created in 1949, it was striking to see so many themes and conflicts that are still consistent with the 21 century American family model.

We strongly recommend going to see a play at Le Petit Theater whenever you can – especially this one. It’s the perfect way to set the grounds for a great New Orleans Friday night.