Halloween has come and gone, but this year was definitely one for the memory book! We had the privilege of riding in New Orleans official Halloween parade, Krewe of Boo. Our float, Chucky and The Bride, was led by our frightfully dressed captained Chucky (aka Elliot) who navigated us through our first spooktacular parade flawlessly. 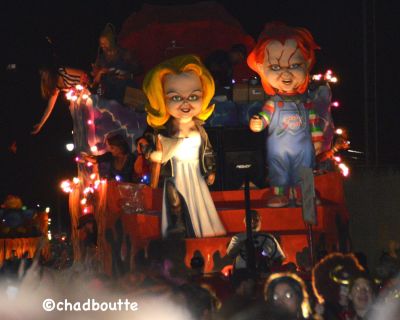 The weather was perfect and  parade-goers of all ages flooded the streets of the French Quarter cheering as we cruised by—hoping to catch one of our many cool (locally made and eco-friendly) throws like Zapp’s potato chips, Aunt Sally’s Pralinettes, PJs Coffee Frac Packs, and more! The biggest hits of the night were of course stuffed animals, blinking beads (we’ll be ordering additional boxes next year!!) —and the floats themselves!

Locally owned but internationally known Kern Studios designed and built the fantastic floats. Although the company is most notably known for its Mardi Gras floats, Kern Studios designs and builds floats for parades all over the world!

After the parade, we made our way into Mardi Gras World where the party continued until the wee hours with live music from Distructo, and New Orleans’ Big Sam’s Funky Nation, dancing, food, and an open bar! We saw so many fun and creative costumes, and met some hilarious and interesting people. So we definitely consider the night a success!

We may also already be counting down the days until next year’s parade! We definitely recommend you make plans to be in town, we hear the Krewe may have some more spooktacular surprises in store!

Want to ride in the parade?  All the cool kids are doing it (us!) This year’s members got to throw stuff from floats, free admission to the after party including VIP access, open bar with complimentary wine, beer, and mixed drinks,  and three-day passes to Voodoo Festival!