Think New Orleans cocktails and you may imagine a college student stumbling down Bourbon Street with an oversized green plastic container filled with an oversweet drink called a hand grenade. That’s one aspect, but the city has a much deeper connection, a storied history with its drinks. The history includes creating their own concoctions as well as putting their own twist on popular drinks from other parts of the map.

Today, we’re looking at a classic by the name of the Sazerac. In the future we’ll periodically look at other drinks like Pimm’s Cup, the city’s twist on the Mint Julep, many other drinks and some of the legendary locations that these storied concoctions developed from. 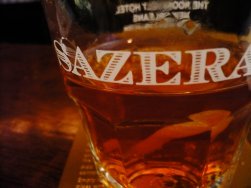 Few drinks are as New Orleans as the Sazerac. It said to be one of the oldest cocktails in America, if not the oldest.

The drink dates back to the pre-Civil War America, the mid-1800s, a time when drinks were enjoyed in coffee houses, not bars. Two coffee houses battle for the title home of the Sazerca, the Merchange Exchange Coffee House and the Sazerac Coffee House, both on Royal Street in the French Quarter.

In 2008, it was proclaimed the official cocktail of New Orleans by the Louisiana State Legislature.

Original version of the drink was along the lines of French Brandy, Sazerac-de-Forge et fils brandy and a dash of Peychaud’s Bitters. Through the years, it’s morphed into the drink described below.

Chill 2 old fashioned glasses with crushed ice. Empty one glass and add Sazerac, Bitters and simple syrup with a ice cubes. Stir well and set aside. Empty the other glass and add Herbaint. Swirl glass to coat thoroughly, then pour out excess Herbstaint. Strain mixture into this glass. Twist lemon peel over drink and serve.