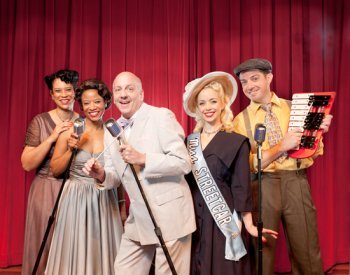 The Joy Theater first opened in 1947 as a movie theater.  In 2011, the Joy was renovated and reopened as a vibrant multipurpose venue in the middle of the hustle and bustle of downtown New Orleans. Today, you can come see live music, comedy shows and theatrical performances at the Joy.

Le Petit Théâtre du Vieux Carré, New Orleans’ most historic playhouse, has played an important role in our nation’s theatrical history since 1916. Since moving into its current home just off Jackson Square in 1922, the “Little Theatre” has entertained thousands of audience members with a wide array of dramas, comedies, and musicals. The theatre underwent a multi-million dollar renovation in 2012-2013 which included updates to its historic auditorium. Le Petit celebrated its 100th Anniversary Season in 2016-2017. Learn more.

After three years of construction, the Saenger opened in 1927 to great public fanfare. The original theater was designed by architect Emile Weil in the style of an Italian baroque courtyard, with constellations of lights studding the soaring ceiling and special effects machines to create the illusions of sunrises, sunsets and clouds across the theater interior. Though neglected, the Saenger was named a historic landmark and added to the National Register of Historic Places in 1977. The theater was on its way back to prominence in 2005 when Katrina floods filled it with water, setting back renovation plans. After a $52M restoration, the Saenger reopened for Broadway shows and other performances in 2013.

The National WWII Museum offers a weekly series of shows that take audiences back to the 1940s. Evening and matinee performances are available, featuring the Victory Belles vocal trio, big bands, dancing and more. Come enjoy a preshow dinner, brunch, and lunch at The American Sector Restaurant + Bar which serves up all your favorite cocktails from the era.

This 1,500-seat Beaux Arts theater in the heart of the Central Business District was designed by noted theater architect G. Albert Landsburgh. Built in 1918 (the New Orleans bicenntennial year), it opened for vaudeville in 1921, but became a movie house soon after. Although it was listed on the National Register of Historic Places in 1982, it was saved from demolition just a year later by the New Orleans Philharmonic Symphony Orchesta and underwent a $3 million renovation. Like New York's Carnegie Hall, the Orpheum is an example of "vertical hall" construction and is prized for its accoustical purity. Tragically, the Orpheum was closed for ten years following Hurricane Katrina, but reopened in August 2015 after a $13 million renovation. Today it is home to the Louisiana Philharmonic Orchestra (LPO).

Founded in 1986, the Southern Rep Theater works to develop and produce new plays by American playwrights. More than 10,000 theater lovers flock to this award-winning, critically acclaimed regional theater every year.

Rivertown Theater is a thriving community theater located in the heart of Rivertown in Kenner. They put on several adult and childrens' productions every year, including orginal plays written by local playwrights. Rivertown regularly delights both critics and audiences. Along with recognition for individual productions and performers,  Rivertown has been named "Theater of the Year” by The Times-Picayune.

NOCCA is the New Orleans Center for Creative Arts, a regional pre-professional arts training center that offers students instruction in theatre arts, music and much more. Throughout the year, they put on a number of Broadway style shows that feature Town Award Winners, Emmy Winners and other talented actors and actresses.

Managed by the Jefferson Performing Arts Society, Teatro Wego offers an intimate cabaret-style approach to live theater, with a champagne brunch served before every Sunday Matinee.