For over fifty years, painters and portrait artists have worked and displayed their art on the iron fence enclosing New Orleans' Jackson Square. This somewhat bohemian colony of artists was not a contrived creation, but rather the spontaneous outgrowth of a burgeoning tourist economy in the French Quarter following World War II. There are even some records and news articles suggesting that artists occasionally sold their work at the fence dating as far back as the late 1800s. 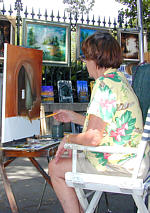 Around 1970, the city decided that the area around Jackson Square should be a pedestrian mall, and the streets were closed off to vehicular traffic. By 1974, the mall was complete. Streets and sidewalks were replaced with a flagstone surface extending from the square's fence to the surrounding buildings. Artists and visitors were no longer crowded into the space of a narrow sidewalk.

Artists still arrive in the morning to work through the heat of summer or the cold of winter, with only patio umbrellas to protect them from the elements. During a sudden downpour, the buzz of the square becomes every artist's mad scramble to get their artwork protected under the balconies of the Pontalba Apartments (or formerly, under the overhang of the Cabildo, before it was fenced off).

Many artists develop a preference for a certain location, so their customers know where to look for them. To look for them is often a task, because as self-employed entrepreneurs, artists keep an unpredictable schedule known only to themselves, and it can change faster than the New Orleans weather. One can often find paintings hanging unaccompanied on the fence, with the artists themselves holding court at a nearby cafe.

New Orleans residents come to Jackson Square on the weekends with their children or grandchildren: for a portrait, or to find that special painting for their living room or office. Tourists and convention attendees will also take time to visit the square, seeking an artful souvenir, or just to say hello to an artist whose work they purchased during a previous visit.

While the atmosphere of the Jackson Square art colony remains much the way it was decades ago, subtle differences underscore the changing times. Decades ago, all business was conducted with cash. Gradually, transactions began to be made with checks, then with credit cards. These days, artists repose under umbrellas, talking on cell phones, with carts and signs boasting their website URLs, and business cards listing blogs and email addresses.

Over the years, many of the square's artists have grown old and passed away, passing on the tradition to their children. In fact, some artists' customers have included three or four generations of a family. Today, many Jackson Square artists are relatively new to the scene, although some remain who have been there since the early 1950s. And if you ask around, there are still a couple who can tell you how it all started.