The St. Louis Cathedral is one of the most famous landmarks in New Orleans. Every year hundreds of thousands of people gaze upon its beauty both from Jackson Square and within its doors. Self-guided brochures are available at the entrance with the donation of just $1. 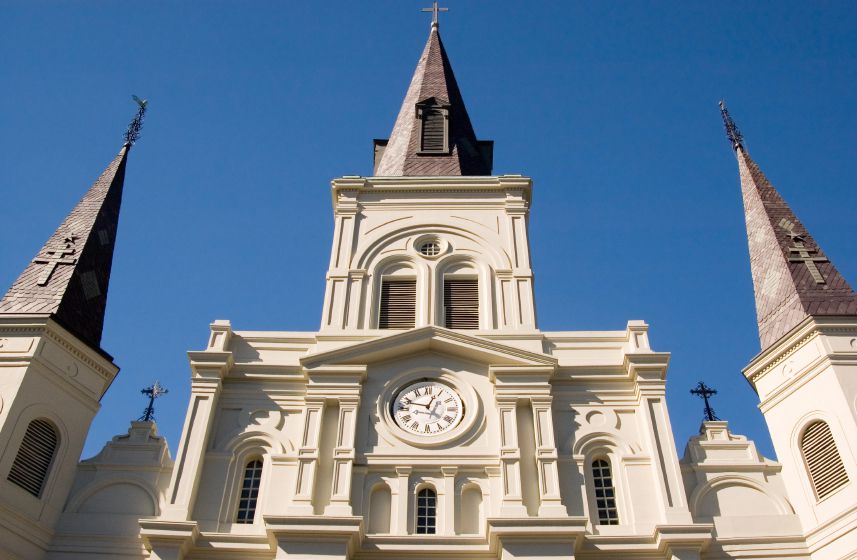 With a history dating back to 1720s, St. Louis Cathedral is one of New Orleans historically rich landmarks. The land where the cathedral stands was first designated as a church site in 1721.

Unfortunately, before its completion the church’s Chief Engineer, the Knight of St. Louis, Adrien De Pauger, died on June 21, 1726. He requested to be buried within the unfinished building; it’s presumed his request was granted, and the church was completed in 1727.

During its six decades, the church was home to French Governors Perier, Bienville, Vaudreuil and Kerlerec and Spanish Governors Unzaga, Galvez and Miro. Both children of colonists and slaves were baptized within its walls and marriage and burial rites were held for the poor and highborn.

The following are the names of persons buried under the church, before it was built and since.

A fire erupted in the Cathedral in March of 1788 after a candle ignited the lace draperies of an altar in the home of a military treasurer, Vincente Jose Nunez, on Chartres Street. The Church of St. Louis was one of many buildings burned to the ground during the fire. More than five years later, a new church was completed on the grounds.

The second Church of St. Louis was a gift from Andalusia native Don Andres Almonester Roxas, who’d acquired several properties since arriving in New Orleans. The new church opened its doors on Christmas Eve, 1794 and dedicated as a Cathedral.

Jean Delachaux, a New Orleans clockmaker, was asked to secure a suitable clock to be placed in the façade of the Cathedral. The city council agreed to finance the clock as well as share in the cost of erecting the tower. Delachaux brought the clock and bell from Paris.

Italian painter Francisco Zapari decorated the interior of the church and its altars and an organ was imported in 1825.

One of the largest funeral to date was held in 1829 at the Cathedral for Pere Antoine who had been pastor at the church from 1785 to 1790 and again from 1795 until his death at the age of 81. His body was laid out in the Cathedral for three days after he passed and thousands visited.