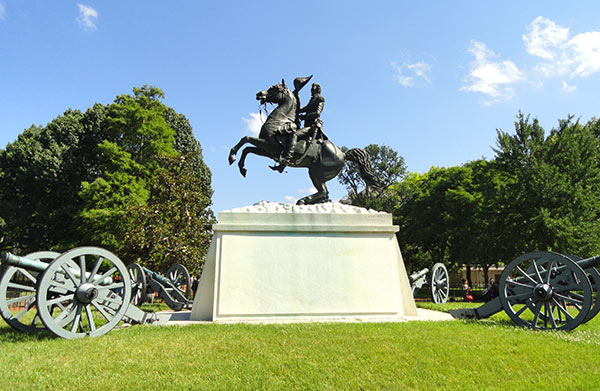 The New Orleans downtown area welcomes Lafayette Square, a prized greenspace located in the heart of the Central Business District surrounded by towering office buildings and housing complexes. The 2.5-acre park is situated across St. Charles Ave from Gallier Hall, which housed the city government for over 100 years.

Originally known as Place Gravier, Lafayette Square is the second oldest square in New Orleans and was designed in 1788 by Charles Laveau Trudeau, who was the general surveyor of Louisiana while the Spanish government was in power. The square is located in what was then known as Faubourg Sainte Marie and was named for Gilbert du Motier, the Marquis de Lafayette, who was a French aristocrat and general who supported and fought alongside the Americans during the Revolutionary War.

From 1834 to 1938, much of the Western area of Lafayette Square was used by the First Presbyterian Church of New Orleans, which featured the tallest steeple in the city. That steeple housed a bell, which General Benjamin Butler would ring to signal curfew during the American Civil War when New Orleans was occupied from 1862 to 1865. The bell and other architectural elements were later moved to First Presbyterian’s new location at South Claiborne and Jefferson Avenues.

In 2005, Lafayette Square suffered significant damage from Hurricane Katrina, which destroyed several of the square’s trees and littered the square with broken glass and debris. To revive the square into an urban respite, neighborhood residents and downtown workers came together to form the Lafayette Square Conservancy, a charitable organization that helped transform the square into the state it’s in today.

Lafayette Square is mostly open greenspace with a bronze statue of Henry Clay in the center of the square and statues of John McDonogh and Benjamin Franklin on St. Charles Ave and Camp St. Gallier Hall stands as a proud historic backdrop on the St. Charles Ave end of the square.

Lafayette Square is a popular local outdoor venue, hosting many events throughout the year, as it has for more than 150 years. This includes festivals, like Crescent City Blues & BBQ Festival, and live music, including concert series like YLC Wednesday at the Square.

Other events inhabit Lafayette Square throughout the year, including weddings, corporate events, and filming. The square is also a popular spot for parade-watching during Mardi Gras as floats and bands ride down St. Charles Ave.

While traversing the busy streets of the Central Business District, head over to Lafayette Square and enjoy the oasis of greenery the square has to offer.