Dylan Dog, released at the end of April 2011 in theaters, prominently features the city of New Orleans throughout the movie. 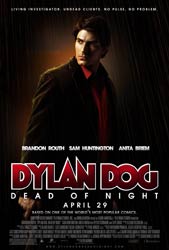 You'd think that a movie about a guy investigating a crime scene among werewolves, zombies and vampires would not be a great film to show off the city of New Orleans, but you would be wrong. Dylan Dog, finally released in theaters on April 29th, 2011 was entirely shot in New Orleans and the surrounding area and utilized several interesting locations that do not normally make it to the big screen.

Le Pavillon Hotel was one of the key locations. In the movie, the hotel served as a private dance club for vampires and regular humans. Of course, with vampires involved, things never end up well for the regular people.

The abandoned power building by the Ernest N. Morial Convention Center was the home of castoff zombie population, and a warehouse by the Mississippi River operated as meat-packing plant run by werewolves. All in all, just another day in the city, right?

In the movie, the lead character Dylan Dog explains that these creatures come to New Orleans because of the extensive night life of the city. They knew that they would not draw suspicion as the only people out on the streets at night.

There are also a couple of time-lapse photography scenes that are quite gorgeous. One shot in particular is set right next to the Mississippi River by the French Quarter Market. From the viewpoint, the audience watches a time-lapsed period of 36-48 hours of ships going by on the river, streets cars on the tracks and traffic on the bridge.

While several movies are filmed in New Orleans, most films do not feature the city nearly as prominently as Dylan Dog. For instance, this summer will see the release of another movie adaptation of a comic book Green Lantern, but preview trailers indicate that audiences won't see much of the city.

While the movie does feature several great locations, Dylan Dog did not perform well with critics or at the box office. The film debuted to less than a million dollars on its opening weekend and will likely not stay in theaters long, but it's worth checking out when it comes to DVD for the New Orleans scenery.

To see a list of great movies filmed in New Orleans, visit our Films page.