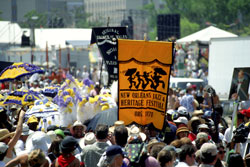 The New Orleans Jazz Fest lineup was announced early this morning, and there are plenty of reasons to be in the Crescent City from April 29th to May 8th.

The New Orleans Jazz Fest will extend over two weekends, with concerts on Friday (4/29) through Sunday (5/1) and on Thursday (5/5) through Sunday (5/8). The entire festival will rock the city at the Fair Grounds Race Course, located 1751 Gentilly Boulevard, 10 minutes from the French Quarter.

If you are interested in attending the festival - and with this year's amazing lineup, you should be! - be sure to purchase your tickets and make your hotel reservations as early as possible. The city will fill up during Jazz Fest, and you'll want to make sure you have the chance to be here!

Get the full lineup and create your own custom schedule at the New Orleans Jazz Festival website.