Mardi Gras is over, it’s true. But that doesn’t mean New Orleans is dead!  March is packed with a lot of great things happening in the Big Easy. Here are just a couple of events that we recommend attending: 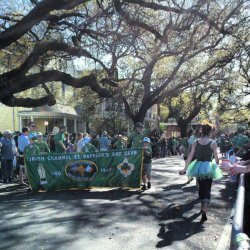 New Orleans is rich in Irish history, and the city’s residents celebrate it accordingly.  Parades and parties will be thrown across the Big Easy beginning Friday, March 14 and going through Sunday, March 23.

The Irish Channel Parade is our favorite! This parade, which takes place on Saturday, March 15 this year, starts at 1 p.m. at St. Mary’s Assumption Church and rolls through the Irish Channel and the Garden District.

With more than 150 crafts beers to taste from local and international brewers, the New Orleans International Beer Festival is the go-to event for beer aficionados.  The exact lineup is still in the works, but festival goers can expect beers from local mainstay Abita, far away favorites like Brewery Ommegang from New York, and several imported brewing companies.

The 2014 festival is Saturday, March 22 from 2 p.m. to 6 p.m. in Champions Square (next to the Mercedes-Benz Superdome).  There will also be outdoor entertainment and an Education Area, where you can learn about food and beer pairings, Sam Adams history and more.

Fans of the legendary playwright Tennessee Williams can’t go wrong with this festival. From March 19 to March 23, Williams’s work will be showcased and studied by actors, literary scholars and fans from all around the nation.

To see more events happening throughout the year, visit our Events page.