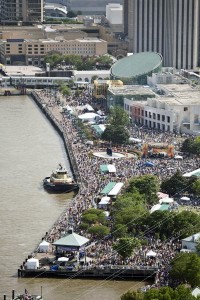 The French Quarter Festival estimates that over half a million people attended the festival this past weekend. Their official numbers placed the attendance around 533,000, up 20,000 from last year. The festival has seen continued growth over the past few years: 2010 saw an increase of over 70,000 more in attendance than the previous year!

This success is not confined to just the festival. Hotel occupancy for Friday and Saturday was 100%, and the first and last days of the festival boasted an occupancy rate of greater than 85%.

The people of New Orleans obviously approved of the addition of an extra day to the festival, with strong attendance from the very beginning of the day. Executive Director Marci Schramm also credits the extra day for the large crowds that came out to the parade. Since people were already in town, they were able to come out early to support the parade and the Jackson Square concerts.

The French Quarter Festival relied on its army of volunteers and numerous musical acts. Over 1,800 volunteers gave their time, and more than 260 music groups performed during the festival.