Things to do on Fourth of July in New Orleans 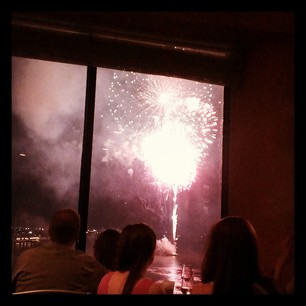 If you’re looking for a great city to watch fireworks in Friday, then look no farther than New Orleans. Year after year, thousands of locals and visitors gather here to celebration the Fourth of July, and it’s a whole lot of fun.

Independence Day in The Big Easy is about more than just fireworks though; it’s a whole day of activities.  Here’s what we recommend doing Friday:

Take advantage of the discounts

Many of New Oreans’ shops and boutiques will have July 4th sales going on, which makes this a great weekend for bargain hunters.  It’s also a great time to experience some of the city’s biggest attractions at a reduced price.  From July 3 to July 6, you can get $4 off any single ticket (adult or child) to The Aquarium of the Americas or The Audubon Insectarium.  That means if you’re a family of four, you’ll save $16 by visiting these attractions this weekend!

Go on a river cruise

What’s even better is that you can get discounts for cruises on both steamboats, which can be viewed and printed out online.

It’s already been established that New Orleanians know how to throw a party, so it shouldn’t come as a surprise that this city takes its fireworks seriously.  Instead of having one fireworks show, the city has set up “dueling barges” where fireworks are shot from on the Mississippi River at the same time.  It’s a show that’s unlike any other fireworks show you’ve ever seen. WWL 870 AM and Magic 101.9 FM broadcast patriotic music synced to the show.  You can also live stream the music from WWL.com if you want to use a mobile device.

Many people like to watch the fireworks from the French Quarter.  If you’re one of these people, then we recommend watching from Woldenberg Park (between Governor Nicholls Street Wharf and the Spanish Plaza) since this spot often offers up a great view.  Algiers Point is also a great place to watch the fireworks since you’ll see the entire city of New Orleans as the backdrop.  Families often set up blankets, chairs, food and drinks, so it’s more of a family atmosphere.