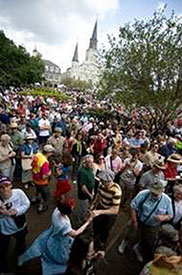 The French Quarter Festival is here with 4 days of festival in 2011! Tonight kicks everything off with the TGIF "Thank Goodness It's Festival" Kickoff Party at the House of Blues. Zydeco king Rockin' Dopsie, Jr. and bluesman Little Freddie King will keep the House rocking throughout the evening, with Dopside playing the Music Hall and King in the VooDoo Garden.

The focus switches over to the heart of the French Quarter in Jackson Square on Thursday, where the festivities begin at noon with the Preservation HallStars. The largest free music festival in the South boasts a wide array of styles, including jazz, funk, classical, gospel, cajun and zydeco, and brass bands. Bands include


Despite adding an additional day to the festival, the French Quarter Festival Parade will still be on Friday, starting at the 100 block of Bourbon Street and winding through the Quarter to Jackson Square. The parade will start at 10 a.m.

While at the festival, be sure to check out the delicious food and drinks from several New Orleans restaurants.

See the full French Quarter Festival live music schedule and create your own personalized, printable schedule at the official site.