New Orleans has more than its own accent. New Orleans has its own language and we’re proud of it. Some of it comes from the multide of lanaguages that were spoken in the history of the city - French, Spanish, etc. Others were just made up along the way.

For you visitors, to give you a head start, I thought I would share with some key pieces of our slang. For the locals that now live far away, I hope these bring back some good memories. 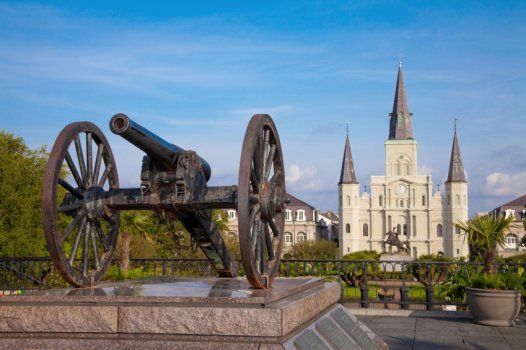 Definition: Slow stream, or body of water running through a marsh or swamp.

The key here is the pronunciation. If you say bay-you, they’ll know you’re not from around here.

Definition: Sandwiches served with lettuce, tomatoes and mayonnaise: "the works."

This is important when you’re ordering a po-boy. Unless you’re a picky eater, you don’t want it naked (plain), you want it dressed. Use this at a po-boy shop and you’ll fit right in. Unless of course you say bay-you.

Definition: Something extra that you didn't pay for--thrown in to sweeten the deal--like a baker's dozen.

Like when the server brings you an extra beignet, free of charge. It’s part of the positive vibe that fills the city.

One of my favorite New Orleans style phrase. Use it in a sentence like: I’m heading out, I’m making groceries.

Definition: Median or grassy area between the paved areas on a boulevard. Named for the original Canal St division between the Americans and Creoles, who did not like each other.

It’s not a median, just like it’s not a trolley (it’s a streetcar!). You’re not watching the parade from the median, you’re meeting you’re friends in the neutral ground!

Definition: Shaved ice (nearly powder) served with flavored syrups. Those of you in the north might throw 'em...we eat 'em!

Is it snowball season yet? They’re the perfect treat to cool down with on a hot summer day. I'm craving one from my favorite shop on Tchoupitoulas. (see definition and proununcation below)

Definition:  Interesting street name. One of the trickiest to pronounce--and spell!

For more translations, definitions and pronunciations of how we speak in New Orleans, check out our glossary page.