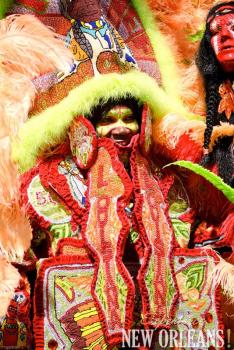 The Mardi Gras Indians, with their beautiful, intricate and handmade costumes take to the streets of New Orleans this weekend. In addition to being St. Patrick’s Day, this Sunday is Super Sunday.

While St. Patrick’s day is always on March 17, Super Sunday is always the third Sunday of March and close to St. Joseph's Day, this is one of those years that the days coincide.

The festivities start at 11 a.m. with music at A.L. Davis Park (2600 Lasalle St; near the intersection of Washington Street and LaSalle Street in Central City).

The parade starts at 1 p.m. and welcomes the general public to watch, it lets natives, as well as visitors to the city admire their detailed costumes, crowns and accessories.

Because of class restrictions, high costs and outright racism, few in the ghetto could join a traditional Krewe and parade with the floats on Mardi Gras. This led to members of the black society in New Orleans to develop their own style of celebrating Mardi Gras.

The groups, known as tribes are named based on the streets of their ward or gang. The Indians named themselves as a homage to the native Americans who helped slaves escape. Local Indians often accepted slaves into their society after they made their break for freedom.