New Orleans and its coffee 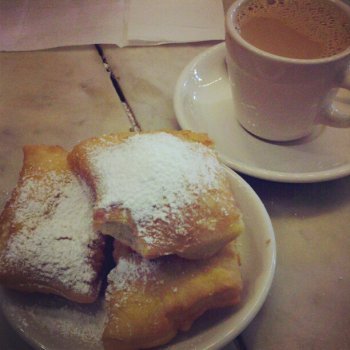 This probably isn’t big news to anyone that’s ever lived in or visited New Orleans, but Travel + Leisure named New Orleans the third best city in the United States for coffee.

The Crescent City landed in the number three slot, right behind the coffee power house Portland (ranked #2) and the home of Starbucks, also known as Seattle (ranked #1). Whether you just want to a good up of joe to wake up after a late night out, a café au lait to go with your sugar covered beignet or are a fellow coffee snob that’s into specialty coffee, there’s a café or coffee shop with your name all over it here in New Orleans.

At one point, New Orleans was the number one port for coffee. Almost all of the coffee beans imported into the United States came into the country via our very own Port of New Orleans. Today, not as much coffee comes through New Orleans, but it’s still one of the most caffeinated cities in the United States.

Travel + Leisure featured the standards Café du Monde for their coffee with chicory and Morning Call for their French drip. Another stop to make in New Orleans is Café Beignet, known for their beignets (of course) and also their coffee. They’re located at 311 Bourbon Street and 334-B Royal Street.

Travel + Leisure surprised me when they suggested that if you want something more than a caffeine kick, try Antoine’s Café Brult Diabolique. It’s a hot spiced coffee, complete with flaming Brandy. I’ve been to Antoine’s, but I haven’t tried their Diabolique…yet.

You can dig a little deeper and find coffee shops in just about every neighborhood here. Many of them are independent and locally owned, including a growing number “third wave” coffee shops that brew coffee and espresso with some of the best beans in the world. There’s even a roving truck looking for under caffeinated souls that’s often spotted on Magazine Street.

New Orleans and the other cities on the list were carefully chosen by the readers of Travel + Leisure magazine during their annual America’s Favorite Cities survey.